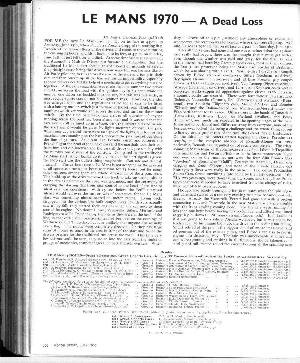 For me the 1970 Le Mans race fell flat on its face at 4 p.m. on Saturday, June 13th, when Dr. Ferry Porsche dropped the starting flag. In spite of the heroic efforts of the drivers and teams to revive it during the ensuing 24 hours, and lift it back on to its feet, at 4 p.m. on Sunday, June 14th, it just fell over and died. At some time last year someone in the Automobile Club de l'Ouest put forward the suggestion that the traditional Le Mans start should be abandoned on grounds of safety, the principle cause being that drivers now wore full seat harness like an Air Force pilot and to run across the road at the start and jump in their cars and then buckle up all the harness was an impossibility, especially as some drivers needed the help of a mechanic to get everything buckled together. A flippant suggestion was made that the number two driver should run across the road with the ignition key in his hand while the number one driver sat buckled into the car, but this was put aside, as most racing-sports cars do not have ignition keys.

However, the idea was enlarged upon and the regulations called for all cars to be fitted with a battery master-switch just forward of the left rear wheel, and the number two driver would run across the road and turn on the master switch. By the time race week had arrived all question of anyone running across the road had been abandoned and it was said that the cars would still be lined up in echelon, with the drivers buckled in and the start signal would be given by lights mounted opposite the pits. When race day arrived there were no signs of the lights, but four or five marshals were standing on the bank opposite the pits, spread out along the line of 51 cars. At 4 p.m. Dr. Porsche raised and lowered the French flag at the head of the line of cars and the marshals took their cue from him and did likewise and the cars all drove off, presumably with the number one drivers at the controls. Compared to the traditional Le Mans start, which builds up to a climax as the start signal is given, the 1970 start was the dullest thing imaginable. (But safe and clinical, hurrah!). The 24-hour race at Le Mans is not accepted as the greatest of all sports-car races just because it runs for 24 hours, but for many other reasons, among them the whole atmosphere of the 4 p.m. start. The build-up as the drivers crossed the track to take up their positions in the circles painted on the road was enormous, and the ceremony of carrying the starting flag from race control to the head of the line of silent cars was enormous.

With 15 sec. before the "off" a natural silence would fall over the vast crowds of spectators, for the Le Mans start was something almost sacred to motor racing. Lying back, strapped into the various low-built coupes, very few drivers actually saw a flag fall, they started their engines when the car next to them started its engine. No doubt Elford, Vaccarella, Siffert, Merzario and Rodriguez saw Dr. Porsche drop the flag, as they were at the head of the line, in that order after practice times had been set on the evenings of Wednesday and Thursday, but it is unlikely that anyone else actually saw a flag. The public were completely deceived, for they pay large sums of money to stand in the area in front of the start and to see the drivers prepare for the traditional run across the road. This time very few drivers could be seen, they sidled into the cars from the midst of groups of mechanics, team managers, helpers and well-wishers. When they all drove off at 4 p.m., without any atmosphere or excitement whatsoever, the reaction was to wonder where they were all going. As I said, Le Mans 1970 fell flat on its face at 4 p.m. on Saturday, June 13th.