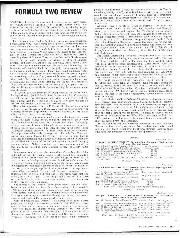 From the Motor Sport Archive
The arrival at Hockenheim the following week of the Jochen Rindt Racing Ltd. truck (and of Rindt himself) was something of a surprise, especially when it was discovered that certain promised safety alterations, among them the erection of chicanes to slow down the cars on the very long straights, had not even been started.

Rindt's last appearance here, in 1968, provided him with a win, but he firmly refused to return in 1969, saying that the slipstreaming type of racing, involving large bunches of cars with drivers of very mixed ability at high speed, was too risky.

Before race day there were grumbles of a similar tenor from many of the newcomers to Hockenheim, and on the first lap of the two-part race the incident which many had forecast took place. Mercifully, the cars had slowed down to 80 m.p.h. or so, or were in the process of doing 80, as they prepared to enter the slow speed bends inside the packed stadium section of the track, when there was a collision. The culprit was undoubtedly the Argentinian Formula Two Champion Carlos Reutemann, having his first-ever race in Europe. Having succeeded in outbraking half a dozen cars, Reutemann's new Brabham pushed Rindt's Lotus out of the lead and caused a couple of damaging accidents behind. Nobody was hurt but three cars were out of the rate and Rindt elected to make a couple of stops to rectify minor damage.