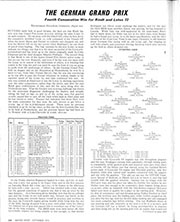 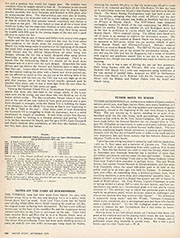 Putting aside luck or good fortune, the facts are that Rindt has now won four Grand Prix events in a row, driving the same Lotus 72 on each occasion. He ran away with the Dutch GP, when he first drove the completely modified Lotus 72, took command of the French GP when the faster Matra and Ferrari 12-cylinder cars dropped out, and won the British GP on the last corner when Brabham's car ran short of petrol when leading. The four victories by the new Lotus 72 must indicate two things, one that it is the most successful of the Cosworth-powered cars and has lived up to the claims originally made by Colin Chapman and his chief designer Maurice Phillippe. The second thing is that Rindt is one of the fastest Grand Prix drivers active today (a fact no-one has ever disputed), and even if he has won two races with the Lotus 72 by reason of the misfortune of others, it is winning that counts in the long run and you must be near the front if you are going to profit from the misfortune of others. In the German Grand Prix, held on August 2nd on the Alotordrom at Hockenheim, he won by a mere 0.7 sec. from Ickx (Ferrari flat-12), but the win was convincing as he was able to pass the Ferrari whenever he wished, thanks to the superior speed of the Lotus 72, and Ickx confirmed this fact. As was very evident at Zandvoort it was the Lotus 72 showing superiority over the other competitors, rather than the driver, and after the race Rindt gave confirmation of this, and did the same thing after the Hockenheim race. That the Ferraris were a strong challenge was shown by the newcomer Regazzoni challenging the leaders, and actually taking the lead on laps 22 and 23 of the 50-lap race, but gearbox trouble caused him to spin off the track when back in third place and he was forced to retire. Practice had indicated that these three were the main contenders for they were the only drivers to get below a 2-min. lap of the 6.78-kilometre circuit. There were no previous standards to go by for lap times, as this was the first Formula One race to be held at Hockenheim, and the previous fastest lap had been set by Bonnier with a Lola-Chevrolet in 2 min. 06.2 sec.