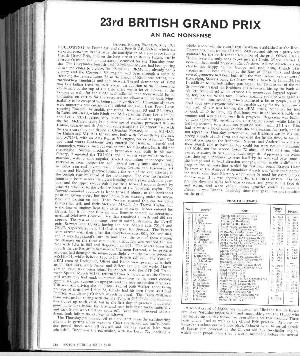 Following the Dutch GP and the French GP, both of which are reported elsewhere in this issue, the anticipation of a great race for the British Grand Prix, held on the long circuit at Brands Hatch, was in everyone's mind as the contestants assembled for the Thursday practice. The 12-cylinder Ferraris and 12-Cylinder Matras had been getting closer and closer to victory, the 12-cylinder BRMs had already had a victory and the Cosworth V8 engines had been through a spate of troubles; the revised Lotus 72 in the hands of Rindt was setting new roadholding standards and the Stewart/Tyrrell dominance of 1969 was fast fading from the 1970 scene. In addition to the tension and excitement at the top of the field there was a lot of interest at the bottom as well, for the RAC had indicated that there would be no limitation on entries for the race, and no elimination by qualifying; inability to be competitive being the only criterion. Consequently there were numerous new entries in the official list, Gold Leaf Team Lotus entering Emerson Fittipaldi, the rising Brazilian F3 and F2 driver, in Lotus 49C/R10, while Rindt and Miles had the Team Lotus 72C/2 and Lotus 72B/1, respectively. Gethin was intended to appear with the full McLaren team, but a shortage of engines prevented this so Hulme, Gurney and de Adamich represented the Colnbrook firm with the same cars they had driven at Clermont-Ferrand, namely, M14D/1 for Hulme and M14A/1 for Gurney, both with Cosworth V8 engines, and M7D/1, with an Alfa Romeo V8 engine, for de Adamich.