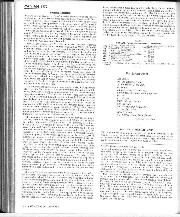 As often happens in the Can-Am series, the entry and the interest begin to perk up as the series heads towards the final races on the West Coast. This year was no exception and a number of new or improved cars made their first appearance at the eighth round of the 10-race series. The race was held at Donnybrooke International Speedway, a circuit new to the Can-Am series (though it has been used before for TransAm and Continental events) which is set amid a pine-clad resort area in Minnesota. It is a wide, completely flat circuit, three miles in length, with a 4,000 ft. pit straight (which doubles as a drag strip) and an interesting variety of 10 turns that includes two long sweepers taken flat-out in the Can-Am cars (185 m.p.h.).

Both Denny Hulme and Peter Revson needed new cars following their crashes at Road Atlanta. Hulme's was another M8D, built up by taking the chassis tub from the new (and as yet unraced) M8E and adding the 4 in. wider M8D suspension. Revson's new Lola, although still known as a T220, was actually 10 in. longer in the wheelbase (following a modification Frank Gardner found worked so well in his Formula 5000 Lola). The chassis tub is unchanged, the extra length all being added forward of the front bulkhead, but Revson said the new car was much more stable. The old car's pitching tendencies had gone, the understeer was down considerably (though still a bit too much) and the braking much improved. Another new car was a second works BRM Type 154, driven by Pedro Rodriguez, which incorporates all the modifications made to George Eaton's car in the first seven races. Not new, but making its first appearance this year, was the Ferrari 612 campaigned last year by Chris Amon. Driven this year by American Jim Adams, it should no longer be known as a 612 since it is fitted with a 5-litre V12 as used in 512S.