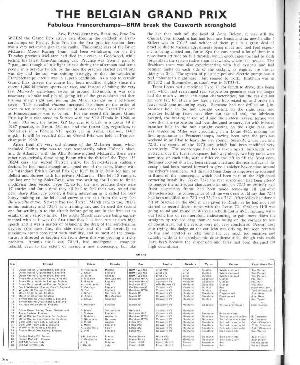 When the Grand Prix circus assembled in the paddock at Francorchamps on Friday, June 5th, for the first practice session there was a very noticeable gap in the ranks. The orange cars of the Bruce McLaren Motor Racing Team had been withdrawn, for on the Tuesday previous McLaren had died in a crash at Goodwood, while testing his latest Can-Am racing car. Practice was from 5 p.m. to 7 p.m., and though a little light drizzle during the afternoon had some people in a nervous twitch, by the time the practice started everything was dry and the sun was shining strongly, so that the wonderful Francorchamps circuit was in superb condition. As a sop to certain Grand Prix drivers the course had been modified slightly since the recent 1,000-kilometre sports-car race, and instead of taking the very fast Malmedy right-hand sweep at around 150 m.p.h, it was now necessary to brake really hard, going left of the grass island and then turning sharp right and joining the Masta straight on a left-hand sweep. This so-called chicane increased lap times to the order of seven to ten seconds, so a new set of standards for Grand Prix cars at Francorchamps was to be set. For the record the fastest Grand Prix lap in a race stood to Surtees with the V12 Honda in 1968, at 3 min. 30.5 sec., the fastest GP lap ever to Clark in a Lotus 49 in 1967 practice, at 3 min. 28.1 sec. and the fastest lap, regardless, to Rodriguez in a Porsche 917 sports car in 3 min. 16.5 sec., 160.3 m.p.h. It will be recalled that no Grand Prix was held at Francorchamps in 1969.