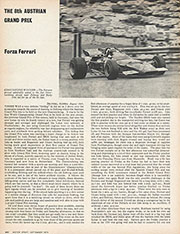 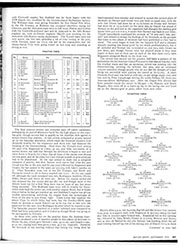 There was a very definite “feeling” in the air as I drove over the mountains towards the centre of Austria, to Zeltweg where the Austrian Grand Prix was to be held on the new Osterreichring. It was to be the first Wold championship Grand Prix to be held on the new circuit, the previous Grand Prix of this season, held in Germany, had seen the new Lotus 72 win its fourth victory in a row, but Ferrari was getting stronger and stronger and challenged the Lotus very seriously at Hockenheim; the cars using Cosworth engines were on the decline as regards engines, for reliability was fast disappearing and replacement parts and overhauls were getting behind schedule. The feeling that the Grand Prix scene was reaching a major change it its history was heightened by both Ferrari and BRM having four cars each at the circuit and three entries each, the Italian team in a strong position with Ickx as leader and Regazzoni and Giunti backing him up well, both having made good impressions in their first season of Grand Prix racing. A very large support force of spectators for Ferrari was pouring in from Norther Italy and the Austrian countryside seemed to be alive with Grand Prix fever, motoring sport in Austria being in the throes of a boom, actively spurred on by the victories of Jochen Rindt, who is regarded as a native of Vienna, even though he was born in Germany and now lives in Switzerland. The Osterreichring was opened last summer with a sports-car meeting and then a 1,000-kilometres sports-car race as part of the Manufacturers’ Championship. It is a permanent circuit carved out of the grass and fir-clad hillside overlooking Zeltweg and the airfield where the old Zeltweg races used to be run, and is one of the better artificial circuits. It follows the contours of the land so that it abounds in steep climbs, sharp descents, falling-away curves and has five completely blind hill-brows, beyond which are fast curves, so that a driver must know exactly where he is going and be precisely “on line”. On each of these brows there are light signals which can be switched on to give warning of incidents happening over the top. If the circuit lacks anything it is a slow corner or a sudden change of direction that calls for maximum braking, but apart from that it is a satisfying circuit on which to drive, while the pits and paddock area are large and spacious and well able to cope with a proper Grand Prix meeting.