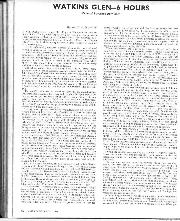 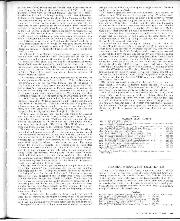 A visitor driving through the village of Watkins Glen in New York State, U.S.A., might be forgiven for thinking that it was a sleepy American village by an attractive lake. The mellowed clap-board houses with verandah fronts would make a film set for "Peyton Place" and the local beauty spots seem a good reason for stopping at a nearby motel.

To the afficionado, however, Watkins Glen is the heart of road racing in America, as opposed to the oval raceway events performed at tracks like the Indianapolis Speedway. Some three miles from the township is a challenging 2.3-mile circuit set in countryside resembling that of Spa, having some of that classic circuit's sweeping curves and changes of altitude. It is a circuit in the European style, where spectators can wander from corner to corner to see the changing attitudes of the cars over a variety of terrain.

The whole venture is a community effort with all profits being ploughed back by the enthusiastic local organising body, the Watkins Glen Grand Prix Corporation. Incredibly, this small band of devotees was recently able to stage one of the events of the year for the American race follower and organised the ninth round of the World Manufacturers' Championship for prototype and sports cars, together with the third round of the 1969 Can-Am series for Group 7 cars as a "back-to-back" speed feast on Saturday and Sunday, 12th and 13th July.

The double event was an added incentive to the manufacturers who were able to make a dual entry and run their Group 6 cars to add interest to the Can-Am racers which suffer from a shortage of competitive cars, leaving the McLaren duo virtually unchallenged. Porsche and Matra were therefore able to endeavour to collect some of the 50,000 dollars Can-Am prize money in addition to the 20,000 dollars offered for the 6-hour race.

Having sewn up the 1969 World Manufacturers' Championship, it would seem at first glance that Porsche had no need to enter the Watkins Glen 6-hours race. Their wins at almost every sports/prototype race in Europe gave them maximum points standing, but the Porsche season started badly with debacles at Daytona and Sebring, and the U.S. Porsche dealers smarted a little at this. Additionally, the Watkins Glen race was another opportunity for the Stuttgart team to do some flag flying for their Austrian branch. The Porsche entry, therefore, consisted of two 908 short-tailed Spyders entered under the Porsche of Austria banner. They were both as used at the Nurburgring 1,000 Kilometres, one for Siffert and Redman being the new, high-sided body shape and the other, with the older body, was for Buzzetta/Lins. Tony Dean also had the benefit of works drivers Elford and Attwood and the works technical umbrella for his private 908 Spyder. This strong German entry was opposed by a duet of the noisy 3-litre French Matras driven by Servoz-Gavin/Rodriguez and Widdows/Guichet, the former being the latest 650 with F1-type suspension which was driven by Beltoise and Courage into fourth place at Le Mans. The other was that driven by Widdows and Nanni Galli to gain seventh place at Le Mans and was the interim 630/650 model.