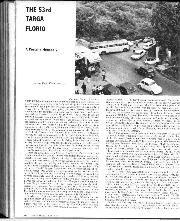 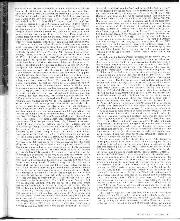 The Targa Florio is not so much a race as a state of mind and a drive down through Southern Italy and along the fantastic northern coast road of Sicily puts you well into the atmosphere that can only be Targa Florio. No matter how quietly you leave Messina, heading west for Palermo, the mountain roads soon get into your blood, as does the approaching awareness of the Targa Florio, and if you do not get involved in a hair-raising dice with a local "sporty boy", which is hard to avoid, the mere nature of the road tends to lead you on until tyres are screaming and rock walls are getting perilously close. The pre-race centre of the Targa Florio used to be Palermo, but with increasing chaos in the city traffic the organisation moved out to Cefalu, a few miles from the Circuit of the Madonie where the race is held. Known as the Little Circuit of the Madonie, it is 72 kilometres (44 miles) to the lap, and not to be confused with the real Circuit of the Madonie, on which the race used to be held in early days, which was many times longer. Official practice is held on the Friday before the race, allowing all day Saturday to prepare for the 10-lap event, which takes more than six hours to run, but most drivers are out during the days before practice, trying to learn the way round, trying out their cars and generally getting into the spirit of the Targa Florio.

Alter the usual dice from Messina I arrived in Cefalu amidst the biggest confusion imaginable. There were factory Porsches and private Porsches everywhere, the Dunlop Service trucks were surrounded by people and tyres, practically every car seemed to be carrying a racing number, the sun was shining, the flowers were in full bloom, local farmers were still riding on donkeys or mules, Redman was just setting off in the "hack" factory Porsche 908 for an unofficial lap of the circuit, Porsche 911 coupés were blazing away up the road, and in the midst of it all the local bus was trying to turn a sharp corner and had become completely wedged among the casually parked cars, and the driver was hooting away furiously on his two-tone vacuum horn. I parked my rather hot and breathless Lotus Europa and smiled happily; it was Targa Florio time. The only thing missing was the shrill scream of a Prototype Ferrari going up the road, for Maranello were giving the race a miss, due to the Monza 1,000-kilometre race and the Spa 1,000-kilometre race being in close proximity to the Targa Florio, one immediately before and the other immediately afterwards.