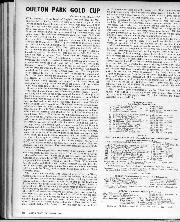 It is fortunate for the North of England that they have the Mid-Cheshire Motor Racing Club, for these enthusiastic people do their utmost to bring Grand Prix cars to the North with their annual Gold Cup meeting at Oulton Park. It was at the Gold Cup meeting in 1961 that Moss showed the potential of 4-wheel drive, when he drove the Ferguson P99 car, so it was fitting that this year’s race should have a 4-wheel-drive atmosphere about the entry. Gold Leaf Team Lotus arrived with but one car, a 4-w-d Lotus 63 for Rindt to drive, and Matra International had every intention of letting Steward race the MS84 car. As the Gold Cup race stands on its own and does not count for any Championship, both teams were prepared to use the race as an experiment. With Lotus there was the 4-wheel-drive car and nothing else, so Rindt had to get down to the job of adapting himself in practice. As there was only one car available Hill had to make do with a Formula Two Lotus from the works-supported Winkelmann team. Two 4-w-d entries were made before the Nürburgring, where Andretti crashed the second Lotus 63. Matra were not so convinced about the MS84 and had their two MS80 cars in the transporter as well. Stewart had only just started practice with the 4-wheel-drive car when the Cosworth V8 engine broke, so he hurriedly switched to his usual MS80 2-wheel-drive car. The complicated MS84 needed 12 hours or more of work to change the engine, and Tyrrell had only brought the minimum of mechanics with him so it was decided to race the MS80 and put the 4-wheel-drive car to one side. Rindt’s 4-w-d practice was stopped a bit short when the mechanical fuel pump seized and broke the driving belt, so he continued with some laps in the second Winklemann F.2 Lotus.

Stewart was by the far the fastest in practice, his only opposition coming from Ickx, who had the two works Brabhams to choose from. Bonnier was going quite well in his newly-acquired Lotus 49B when part of the front suspension came adrift and he had a lurid crash at Island Bend, being lucky to escape with a minor blow on the head. The car was wrecked and he was out of the race. The only other Formula One cars in the entry were Moser’s Brabham-Cosworth V8 and Lucas with the ex-Bernard White B.R.M. V12, the rest of the field being made up with Formula 5000 cars, though at the last moment Rollinson substituted his Formula Two Brabham for the Lola-Chevrolet V8 he should have driven. The Owen Racing Organisation entered two cars, but after the Nürburgring shambles the entries were withdrawn and Oliver drove Norinder’s Lola-Chevrolet V8 and Surtees went off to America. In spite of much publicity and a "load of old guff" in the programme, the Formula 5000 cars were no match for the Formula One cars, and while they handle like sick camels in wet sand, as they appear to do at the moment, they are not likely to be any challenge. With their great iron Chevrolet engines in the back they cannot hope to by much good on handling, compared with an identical chassis carrying a lightweight Cosworth V8. The young Italian driver de Adamich was fastest with one of the Surtees Specials known as a T.S.5, and Oliver equalled his time later in the practice. Hill and Rollinson with the Formula Two cars were amongst the rear of the Formula 5000 cars.