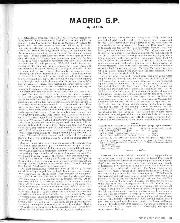 The original intention of the O.D.A.C.I.S.A., who organise the racing on the Jarama circuit near Madrid, was to hold a full-scale Grand Prix, standing on its own feet as the Madrid G.P. because the Spanish G.P. had been moved to Barcelona. When they discovered their date was clashing with two other big meetings there was little hope of the original idea being carried through, so they modified the plan to running a combined race for Formula One cars and Formula 5000 cars. Initially Team Lotus and Matra showed signs of interest along with some of the more important private teams and the field was made up with a handful of newcomers with ex-works Grand Prix cars and a few Formula 5000 cars. With Hill, Rindt, Stewart and Courage on the list a keen little race could have taken place, with newcomers having the opportunity to race in good company. At the last moment all the aces changed their minds, the works cars were withdrawn, and a very depleted field assembled. Things looked black for the organisers, but as it turned out all was well and it proved to be a very pleasant and happy little meeting, the large crowd enjoying some fine sights and sounds, the competitors being more than satisfied and the organisers relieved. The meeting illustrated that not only is there still an element of sport left in motor racing, but a meeting can be enjoyable without any big names or factory cars.

On paper eight cars would not make a race, but as it was it was all good fun and there were good prizes for nearly everyone. As it is not permitted officially to let Formula 5000 cars compete against Formula One cars there were two sets of prize money and two classifications, but the four cars in each category ran together and as far as the drivers were concerned it was a free-for-all race. Dean drove his ex-Bernard White B.R.M. with 3-litre V12 engine, Corner drove Crabbe's newly-acquired ex-works Cooper-Maserati V12, with 3-valves-per-cylinder engine, Stone drove a Brabham powered by a bored-out twin-cam Lotus-Ford engine, and Mosley drove his new square-tube chassis 1969 Lotus Formula Two car with last year's Cosworth FVA engine. Gethin had the Church Farm Racing McLaren with 5-litre fuel-injected Chevrolet engine, fresh from its two Easter victories, Holland had the Alan Fraser Team Lola-Chevrolet V8, and Russell and Lamplough had a pair of Lotus monocoques that originally had H16 B.R.M. engines attached to the rear bulkhead, but now had a tubular space-frame behind the cockpit carrying a 4.7-litre Ford V8 engine. There should have been another Lola-Chevrolet belonging to Hawkins but it was withdrawn due to lack of an engine after the Easter racing.