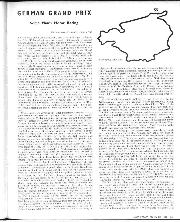 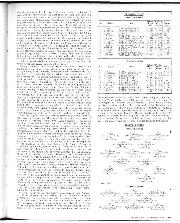 After the 1,000-kilometre race in June, when Siffert set the fastest lap of the Nürburgring in practice at 8 min. 00.2 sec. with a Porsche 908, and Amon did 8 min. 00.3 sec. with the Ferrari 312P, I remarked that no self-respecting Grand Prix driver would be content with a lap sit over 8 minutes if practice for the Grand Prix would be held in dry weather. The weather on Friday and Saturday before the Grand Prix was superb and the Nürburgring and the Eifel were at their best. When the Nürburgring is at its best it is terrific, when it is at its worst, like last year, it is awful. I fully expected the top Grand Prix driver to rise to the challenge of achieving a lap in under 8 minutes, but in my wildest dreams I did not anticipate anyone getting nearly 20 seconds under bogey time, nor did I expect so many drivers to excel themselves. The German Grand Prix is much more than another race in the World Championship series in which to gain more points for the Championship, it is the Nürburgring, and that is a driving challenge that is hard to equal anywhere. To drive a fast lap of the Nürburgring is as satisfying and challenging to Grand Prix driver as is a fast lap of the Isle of Man. T.T. course to the real racing motorcyclist. Wheel-to-wheel racing and cut-and-thrust tactics are of little importance at the Nürburgring, with its myriad of corners of every description in its 22.8 kilometres (14 miles), its steep descents that bring out the bravery in a driver, its fast corners that bring out the skill and above all the whole fantastic character of the circuit that throws down the gauntlet of a real challenge to anyone who thinks he can drive a racing car. The Gods of the Nürburgring who lurk among the forest-clad slopes seem to say "Here is the circuit as it was laid out in 1925, come and beat it if you can, but bring a strong car and be brave and skilful, for this is for true men."

With a heat-wave covering the Eifel mountains everyone was in good humour and were soon giving of their best, the first practice session being on Friday morning. At the last moment Ferrari withdrew his entries for Amon and Rodriguez, reducing the field to fourteen, but what it lacked in quantity it made up in quality. Team Lotus had finally managed to drag Andretti away from his American racing commitments and he was to drive the 4-wheel-drive Lotus 63 that Miles had run at Silverstone. Andretti is fully convinced of the future of 4-wheel-drive and does not want to waste time with the old Lotus two-wheel-drive models, and he has the full support and backing of everyone at Lotus. Since Silverstone the gearbox and power dividing unit had undergone a lot of testing and improving as regards lubrication and the brake calipers had been improved. It had been found that they had a tendency to stick on after application, the rigid inboard mounting on the Lotus 63 eliminating any deflections normally experienced with outboard mountings, there deflections helping to return the brake pads after application to give running clearance. The resident Team Lotus drivers Hill and Rindt were driving 49B models, the former number 10, a newly built-up car, and the latter number 6, that he had driven at Silverstone. The car number 8 that Hill had driven at Silverstone had now been delivered to Bonnier. The shortage of petrol debacle at the British Grand Prix was not as simple as it looked and the 49B cars had undergone a complete revision of the piping and tank pick-up pipes to prevent a recurrence, for there had been adequate petrol in the tanks, but the pumps had not picked up the last few gallons. Ickx was on his own with the Brabham team cars, having BT26-3 and BT26-4 to choose from, and preferring the newer one. Brabham himself was present on crutches, and planning to return to the cockpit for the Italian Grand Prix. Stewart and Beltoise had the two Matra MS80 cars, the crashed Silverstone one having been repaired, and the 4-wheel-drive car was an extra entry with no driver nominated for it. The 4-wheel-drive McLaren was entered but did not appear, McLaren and Hulme contenting themselves with the two cars they have been using all season, abandoning their tray-like engine covers for separate aerofoils mounted on short struts, like a lot of other people were using now that the regulations were more clear and the aerofoils did not have to be part of the bodywork, limitations being on height, width and anchor points. Surtees was driving the latest B.R.M. with strengthened front suspension members and attempts had been made to spread the power and torque of the 12-cylinder engine lower down the speed range. This latest B.R.M. also had a new and enlarged air deflector over the central exhaust system. With Surtees now committed to the new car, Oliver took over P138-01, the interim car with B.R.M. gearbox. The remaining four entries were private owners, Siffert in the Walker/Durlacher Lotus 49B, Courage in the Williams Brabham, full of confidence after the Silverstone race, Elford in Crabbe's McLaren with the pontoon tanks, and Bonnier with his newly 'acquired Lotus 49B, which the Parnell team were looking after for him.