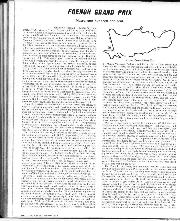 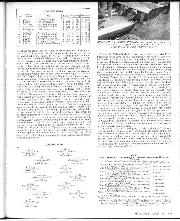 Matra one hundred per cent.

Unlike the Monaco, Dutch, German and Italian Grand Prix races the French Grand Prix seems undecided as to where its real home is, so that it has flitted about from one circuit to another. This movement has been fairly regular and it has fluctuated from Reims to Rouen to Clermont-Ferrand, with one disastrous diversion to Le Mans. The last time it was held at Clermont-Ferrand was in 1965, when the late Jim Clark dominated the scene and ran away from all the opposition. What was significant at the time was that an up-and-coming young driver, also from Scotland, was second in a B.R.M., and though he could not keep pace with Clark, he outdistanced all the other drivers, who included the great names of the time, such as Gurney, Brabham, Surtees and Hill. This was a great driver in the making and his name was Stewart, and when he was asked what he thought he was doing, making all the "great names" look rather amateurish, he said that in truth he was rather embarrassed, for he knew he could not keep pace with Clark but he could not understand where all the other drivers had got to. Another significance about the 1965 race was that it was the first Grand Prix to be held on the newly constructed circuit in the hills above Clermont-Ferrand, so everyone was on an equal footing, and being constructed like a miniature Nurburgring, driving ability was at a premium. At that time the circuit itself was beautifully constructed, but the amenities such as pits and paddock, access roads, service facilities and so on, were negligible, and it was not a happy scene for a World Championship event. In 1969 very little has changed, except for the sad loss of Clark from the racing scene. The circuit is still beautifully constructed, driving ability is at a premium, amenities are nearly non-existent, Gurney has retired from the "big names", Brabham and Surtees were not entered, and Stewart outdistanced everyone, though this time he was not embarrassed by it.

I am often asked my requirements for a top Grand Prix driver, or how I rate ability; among my rather stringent rules of evaluation are the natural ability to win, which a driver has from the word go and does not develop over the years, and complete domination of all other drivers. A driver who makes fastest practice lap in all practice sessions for a Grand Prix, then leads the race from start to finish, and makes a lap record while he does so, is my idea of a real Grand Prix driver. Stewart did all of this at the 1969 French Grand Prix. The opposition to this complete domination was reduced slightly by the absence of Surtees, Brabham and Oliver, but only as far as numbers were concerned, for none of them would have provided active opposition.