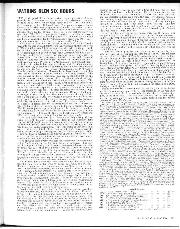 The eighth round of the 10-race series for the International Championship for Makes was run in the form of a six-hour endurance event at the 2.3-mile Watkins Glen circuit in New York State that is also the venue for the U.S. Grand Prix. The organisers were fortunate indeed that Le Mans was postponed to September for, had it not been, it is doubtful if this third American race in the series would have attracted the entry that it did. That is not to say that the entry was sparkling. The F.I.A.'s precipitate decision to restrict prototypes to 3-litres has produced few enough cars as it is, and with only Porsche and Ford in contention for the Championship hardly any other European entrants made the expensive trip across the Atlantic.

With four victories and two second places to their credit, Porsche went into the race with 42 points from their best five finishes and a win at Watkins Glen would have wrapped up the title for them. Ford, on the other hand, had three victories and one third place for a total of 31 points and had to win to keep their Championship hopes alive. Porsche's works entries consisted of four short-tailed 3-litre 908s for Siffert/Elford, Herrmann/Attwood, Patrick/Ikuzawa and Buzzetta/Follmer. Buzzetta has driven for the team on several occasions—he drove the winning Porsche in the Nurburgring 1,000 km. last year—while Patrick probably has more experience with Porsches than any other American, Follmer is not as familiar with themarque, although he did win the U.S. Road Racing Championship in 1965 with a Porsche-powered Lotus 23. Ikuzawa is the Japanese driver who has been racing Formula Three in England for several seasons. The only changes to the Porsches since they ran in the 1,000 km. at Spa were an air scoop mounted on top of the left wing to cool the oil tank behind the left front wheel and two stabiliser flaps at the rear. The flaps, a foot wide and seven inches high, pivot on rods attached to the body above and slightly behind the rear suspension. They are connected to the lower suspension arms by means of a short horizontal arm and a long vertical rod. The flaps are raised at a 35-degree angle and on the straights they act simply as spoilers. However, the linkage is arranged in such a way that when the car corners the angle of the flap on the outside (loaded) rear wheel is reduced, thus reducing the aerodynamic pressure on that side of the car. Conversely, the angle of the flap above the inside rear wheel (which, of course, tends to rise in a corner) is raised, and the air pressure on that flap is increased. The combined effect of the two flaps is to flatten or stabilise the car. This is a development experimented with by the Japanese Nissan firm, and flaps have been used on Porsche hill-climb cars this year, but not on the race cars. They are of little or no benefit on slow corners but Elford said they probably helped on fast sweeping bends.