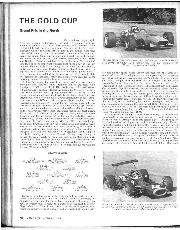 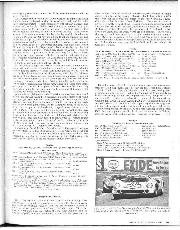 Grand Prix in the North

All motor-racing enthusiasts in the north of England must feel a debt of gratitude to Oulton Park and the Mid-Cheshire Motor Racing Club Ltd. for bringing Grand Prix cars within their reach, especially when our Grand Prix is held in the bottom right-hand corner of the country. In order to avoid clashes with other important events the annual Gold Cup meeting was brought forward a month and benefited from entries from Ferrari, Brabham, Lotus, Matra and B.R.M. There should have been entries from McLaren and Honda, but more important projects kept them away at the last moment, Hulme and McLaren being busy on their Can-Am Group 7 dollar-chasing cars, and Surtees preparing for Monza with the Japanese firm. Nonetheless the entry made up in quality what it lacked in quantity, and luckily the practice on Friday was held in two sessions, so that some really quick times were recorded in the morning, before the inevitable rains came down.

Brabham's existing lap record of 1 min. 31.6 sec. was soundly beaten by Hill, Stewart, Amon, Brabham himself and Ickx, while Rodriguez and Oliver equalled it. Hill was driving the Lotus-Cosworth V8 number 49B/5 as usual, Stewart was driving the Matra-Cosworth V8 with which he won at Nurburgring, number MS10-02 using the same engine, but with wide nose-fins fitted like the Lotus cars, Amon was driving the same Ferrari he had at Nurburgring, number 0011, Brabham was driving BT26-1 with the 4-cam Repco engine, Ickx had reverted to his French G.P.-winning Ferrari, number 0009, Rodriguez was driving B.R.M. number 126-03, now fitted with a large "aerofoil" across the tail, mounted on the rear-wheel uprights and braced forwards to the roll-over bar with cables, and Oliver was in his Nurburgring Lotus 49B/2. In addition to this very fast seven, there was Derek Bell, the new Ferrari recruit having his first Formula One drive in Ferrari 0007, his only previous experience of a 3-litre being some practice round the little Autodromo at Modena. Rindt was not happy, as his usual Brabham BT26-2 went off song in the first practice period and he had to take over the brand new car BT26-3, but before he could get used to it the rains came, so he was in a low position on the grid, after Bell who had done a very creditable 1 min. 32.4 sec. on his first outing in the 3-litre Ferrari. Courage was driving the Parnell B.R.M. as usual, this team also entering the Rodriguez works car as B.R.M. did not want to enter officially. The remaining three runners were Bonnier with his yellow and red McLaren-B.R.M. V12, Lanfranchi with a Tasman B.R.M. V8 on loan, and Hobbs with the Bernard White V12 B.R.M.