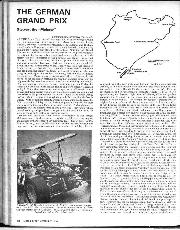 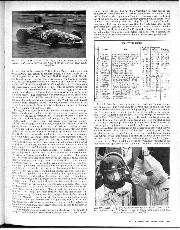 As the Grand Prix "circus" converged on the Nurburgring through the Eifel mountains, Ferrari from Italy, Matra from France, Lotus, B.R.M., Brabham, Cooper and McLaren from England, and B.M.W. from Southern Germany, the rain and clouds headed the same way; and like the "circus" they stayed for three days. With the 1968 Grand Prix season over the half way mark everyone was well prepared and ready for a titanic battle, not only a battle against each other but a battle against the 22.8 kilometres of the Nurburgring, against the myriad of corners, the steep descents, the climbs up, the humps and the fast and slow straights. Last year Clark had got round in a remarkable 8 min. 04.1 sec., during practice and Gurney had set a race record of 8 min. 15.1 sec., so that with twelve months advance, and Formula One cars are advancing rapidly in design, it was not so much as who was going to break eight minutes but how many, with the Ferrari, Lotus, Brabham, and Matra teams in strong contention. However, it was not to be for on Friday morning the weather clamped down and the only records that were broken were those for poor visibility and rainfall. The first practice was from 12 noon until 1.15 p.m. on Friday, by which time the clouds were on the ground and were officially classified as fog! For a time no-one was encouraged to set off round the full circuit, and those drivers who were at the pits and ready to go contented themselves with laps around the "pits loop"; down to the South Curve, back up behind the pits and through the gate before reaching the North Curve. With conditions steadily worsening they were finally given the O.K. to set off on full laps of the Nurburgring and among the keen ones who wasted no time were Hill, Surtees and Beltoise. Although practice continued for the allotted time it was a wet and soggy affair which proved nothing and provided no opportunity for any of the teams to learn anything or to make any serious progress.