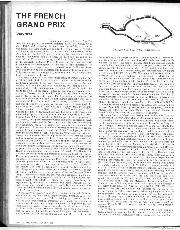 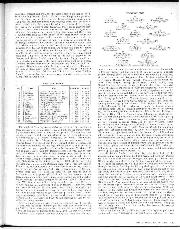 After the upheaval in French motoring circles last winter, when the F.F.S.A. took control of the sport from the A.C.F., a statement was issued that there would not be a further Grand Prix de l'A.C.F., which many people took to mean that there would be no French Grand Prix, but later the F.F.S.A. put out a notice that they would be running the first Grand Prix de France. So 1968 saw the end of the oldest Grand Prix race in history, the G.P. de l'A.C.F., and the start of the youngest, the Grand Prix of France. For those not interested in definitions and organisations all this was of little importance, for the previous races have always been referred to as the French Grand Prix, and the new title is translated into English with the same words. It is really a case of a change of government and title, but the established event remains the same.

The circuit at les-Essarts, some miles south of Rouen on the way to Elbeuf, is in thick forest land and is one of the better European road-racing circuits, being very fast, interesting, spectacular and exciting to drive round, let alone race round, but there is a price to pay and that is the limitation on the amount of time for which the roads can be closed for racing. There is never any practice on Saturday at les-Essarts, so that Grand Prix practice was held on Thursday and Friday in the late afternoon. The first session was supposed to have been from 5.30 p.m. to 6.30 p.m., almost criminally short for a major Grand Prix, but, to make matters worse, it started at 5.20 p.m. and was all over by 6.10 p.m., leaving everyone very disgruntled, the more so as the circuit was used until it was almost dark, by Formula Three contestants and a National "boy-racer" Formula entry. This was the first time 3-litre Grand Prix cars had been on the circuit, and the existing lap record was held by Rindt with a 1,600 c.c. F.2 Brabham at 2 min. 02.6 sec. for the 6.542-kilometre circuit (approximately 120 m.p.h.), so any self-respecting Grand Prix driver expected to break the 2-minute barrier and the faster cars would obviously be averaging over 125 m.p.h., which is a healthy speed on a circuit containing two hairpin bends. As the cars assembled for practice chief interest centred around the appearance of a brand new Honda from Japan, as distinct from the Honda from Slough. This was the V8-cylinder car, with air-cooling and numerous different approaches to Grand Prix car design, and is described in detail elsewhere. There was a certain amount of umbrage in the paddock as Surtees had tried the car at Silverstone, pronounced it not ready to race and intended to put into motion one of his well-known "development and testing programmes", which tend to go on a bit, saying he would continue to race the V12 water-cooled Honda in the meantime. On the morning of practice Mr. Honda took the new car and gave it to Schlesser to drive, on behalf of Honda-France, who were in the throes of trying to overcome embargoes on the import of Honda mini-cars into France; Mr. Honda had made a personal appearance in Paris at the beginning of the week, to assist his business enterprise, and entering his latest Grand Prix creation in the French G.P. with a French driver was obviously calculated to jolly things along in circles above motor racing. As there was no sign of Gurney and his Eagle, the progress of Anglo-American Racers being rather unsteady since they left Weslake Engineering, the Honda-France entry took the programme number of the Eagle, which confused a number of onlookers! While this new car was being run experimentally, the entry of a Grand Prix Alpine-Renault did not materialise, though the car was out on test in Belgium, on the Zolder circuit, it being powered by the 3-litre V8 Gordini engine as used in the Le Mans Alpines.