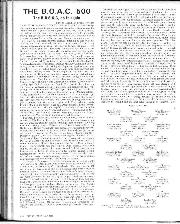 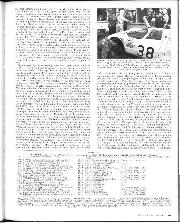 Last year, when the B.R.S.C.C. and the British Overseas Airways Corporation combined to put on our first decent long-distance race for many years, and it proved to be a great success, they started planning the 1968 event but even the most ardent supporter could not really believe that a second six-hour event for Group 6 Prototypes and Group 4 sports cars would be a similar success. Without question it was.

Not only was an excellent entry received, totalling 36 cars with five reserves, but there were only six non-arrivals, three of them being reserves anyway, and an extra entry arrived to take the place of one withdrawal after practice. The entry was divided into Group 4 and Group 6 in two engine capacity classes, 1,300-2000 c.c. and 2,001-5,000 C.C. for Group 4, and 1,300-2,000 c.c. and 2,001-3,000 c.c. for Group 6, in accordance with the new F.I.A. ruling. The small sports car class took in the two reserves so that there were five Porsche Carrera Six cars, known briefly as Porsche 906, driven by Bradley/Liddell, Ashmore/Edmunds, Hone/Harris, Delmar-Morgan/Walton and Cabral/Duval, the last-named pair driving de Udy's car. Against them were three Lotus 47s, now called Lotus Europa in spite of having twin-cam Lotus-Ford engines, whereas Europa originally referred to the production car with Renault engine; these were driven by Taylor/Budge, Jackson/Oliver G. and Miles/Oliver J., the last two being in the factory-sponsored car. The big sports car class contained three Lola 70 Mk. III coupés, all with 5-litre Chevrolet V8 engines, Charlton/Fisher driving Syd Taylor's white car, Bonnier/Axelsson in the yellow one they raced in America and Epstein/Nelson in a dark green one. Opposing them were five Ford GT40 coupés, Salmon/Piper in a brand new one, its 4.7-litre Ford engine fitted with Gurney-Weslake cylinder heads, Ickx/Redman in the Gulf-sponsored J. W. Automotive light blue car, with similar cylinder heads, Hawkins/Hobbs in the former's red 1967 car with wider wheels and tyres and bulging bodywork to give clearance, but with a 1967 engine with Ford cylinder heads, Prophet/Bond in the former's car and Drury/Holland in the former's bronze-coloured car, with Gurney-Weslake heads and fuel injection replacing the more normal Weber carburettors. Challenging all these V8 cars were two V12 LM Ferraris, Rodriguez/Pierpoint in Piper's green car, and Vestey/Pike in the former's dark blue car.