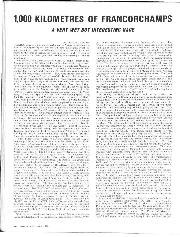 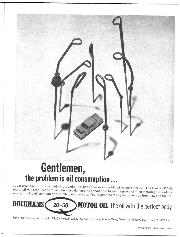 A very wet but interesting race

Taking place as it did, only a week after the Monza 1,000-kilometre race for Prototypes. Sports cars and GT cars, the Belgian event on the magnificent Spa-Francorchamps circuit stretched many of the teams to the limit as regards time and mechanics' work. In spite of this the entry was pretty good and certainly as interesting as Monza, if not as large.

The Ferrari factory sent only one works P4 coupé, similar to the Monza cars and to be driven by Parkes/Scarfiotti, while they assisted the Belgian Equipe National Belge with their P3/4 model and Maranello Concessionaires' similar car, these two having 4-litre engines with 4 o.h.c. like the 1966 works cars and ZF gearboxes, 1967 suspension details and 1967 coupé bodywork. They were driven, respectively, by Mairesse/"Beurlys" and Attwood/L. Bianchi, the former car painted yellow and the latter red and blue. The Chaparral team made the journey up from Italy to do battle once more, this time with car 2F001, whereas they had used 2F002 at Monza. Apart from fairings around the struts of the adjustable "wing," the Spa car was identical in specification to the Monza car, with all-aluminium 7-litre V8 Chevrolet engine, automatic transmission and coupé body with "gull wing" doors, and Spence and Phil Hill were driving again. The Gulf Oil Company's Ford Mirage team, under the control of David York, were present with a brand-new car with a 5.7-litre Holman & Moody Ford V8 engine which was only completed on the morning of first practice and was to be driven by Ickx/Rees. The 5-litre car that this pair had driven at Monza, until an ignition failure put them out, was being driven by Piper/Thompson, their car being given a rest after the Monza race. Of particular interest were two Mark III Lola T70 coupés, both with Chevrolet V8 engines, in the hands of the new owners, Epstein and de Udy; Hawkins was partnering the former and de Klerk the latter, both cars looking like the works Le Mans car of Surtees, with Aston Martin engine. This car was entered but did not arrive as it was not yet truly race-worthy. Both these private cars were brand new and making their first appearance and the first European appearance of the T70 Lola in Group 6 form. To complete this big-car class of likely winners was the P40 Ford of Sutcliffe, fitted with a roof to its once open cockpit, with Redman as co-driver.