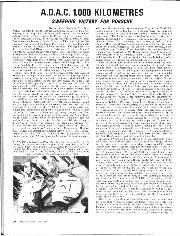 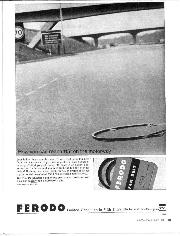 What the entry list for the annual 1,000-kilometre race on the Nurburgring lacked in quality it made up for in quantity. As it was held only two weeks before Le Mans the Ferrari team did not enter any 330P4 cars, nor did any of the agents enter their 330P3/4 cars. Ferrari sent a token entry in the form of a Dino with 2.4-litre V6 engine, as used in one of the Grand Prix cars last year, and Filipinetti borrowed a works 18-valve Dino for his entry. The big Dino was driven by Scarfiotti/Klass and the Swiss entered one by Muller/Guichet, but neither car survived practice, since the works car broke its engine and Guichet had the 2-litre catch fire in practice; he got out unharmed but the car was burnt out, which made one or two "knowalls" keep quiet and stop talking about Monte Carlo. Another entry that was lost in practice was the latest Ford Mirage with 5-litre Gurney-Weslake Ford V8 engine, which Dick Thompson put off the road and damaged severely, he being all right. A G12 Ginetta was also crashed badly, the driver Markey being injured.

At the head of the entry was the Chaparral 2F002 that raced at Monza and it was performing really well on the Nurburgring, Spence making fastest practice lap in 8 min. 31.9 sec., which included a new piece of road just before the start line plateau which takes the form of an S-bend, putting 25 metres on to the length of the circuit and adding 8 to 10 seconds to a fast lap time. The reason for this newly constructed road, beautifully built with graded corners, and not just marked out with straw bales or temporary barriers, is to slow the cars as they breast the Tiergarten hump and start the concrete pit area. Modern road-holding and speeds have gradually made it possible to take the old Tiergarten right-hand bends at over 150 m.p.h., which has meant not only very high speeds through the pit area, but big cars on the limit of adhesion as they breast the rise. The new road layout, with a gentle left, followed by a very tight right and a tight left, has knocked the speed down to about 85 m.p.h., so that the really fast cars are still accelerating through the pit area. Next fastest to the Chaparral was Surtees with the works Lola-Aston Martin V8 in 8 min. 39.6 sec. which he did without sticking his neck out and as this was the first race for this fine new all-British Group 6 Prototype, it was most encouraging. The remaining Mirage, with 5.7-litre Holman and Moody Ford V8 engine, driven by Ickx/Attwood, could not quite break 9 minutes. In the Porsche camp Huschke von Hanstein was assembling a veritable army of drivers, like a general preparing his troops. He had six Porsche 910 prototype cars at his disposal, three with 2.2-litre horizontally opposed 8-cylinder engines and three with 6-cylinder 2.0-litre engines. They all use Bosch fuel injection and are air-cooled, but the 8-cylinders have two camshafts to each bank and the sixes have single camshafts, being basically 911 type engines. The Hanstein army was cleverly arranged with seven German drivers and five "foreigners" and each car had at least one German driver. The 8-cylinders were driven by Mitter/Lucien Bianchi, Herrmann/Siffert, Stommelen/Ahrens, while the sixes were driven by Schutz/Buzzetta (a Porsche driver from America), Neerpasch/Elford and Hawkins/Koch. The 2-litre Porsches were keeping a wary eye on the Autodelta Alfa Romeo team of Tipo 33 cars, which were being driven by de Adamich/"Nanni Galli," "Geki"/Baghetti and Bussinello/Zeccoli but it was obvious that they lacked a top-class driver, though de Adamich was the fastest, but not fast enough.