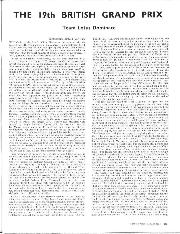 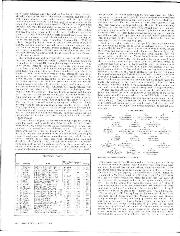 The choice of the R.A.C. fell on Silverstone this year, so with the help of the B.R.D.C. and most of the country's motor clubs the British Grand Prix was held on the wide open spaces of the airfield circuit. Entry was by invitation and all the big teams were represented along with more than the usual number of private owners, some newcomers being given a chance to try their hand at Grand Prix racing.

Brabham and Hulme were driving the two latest Brabham BT24 cars, as raced at the French G.P. except that the instrument panel layout was altered, to bring the instruments nearer the steering wheel. The reason for this was to gain a few extra inches of space for a larger scuttle tank as there was a possibility that the 80-lap race would cut things a bit fine on the existing tank capacity. Stewart was entered to drive the latest, slightly lighter and slimmer B.R.M. H16-eylinder car, Spence with one of the earlier ones and Irwin with the other early car. The first two drivers were entered by the Owen Organisation, and the third by Parnell, who also entered Courage to drive his 2-litre V8 Tasman B.R.M. As it turned out during practice mere was a lot of shuffling of cars and drivers among this quartet and the moves are indicated in the table of practice times. Clark and Hill had the two Lotus 49 cars of Team Lotus, 49/2 and 49/1, respectively, and since their last appearance the gearboxes had been considerably strengthened, as described in "Continental Notes" in this issue. Both Cosworth V8 engines had also been fitted with yet another system of linkage for the throttle-slide controls, in the search for better control of the 410 b.h.p. and both cars had a new method of clutch operation, with the hydraulic operating cylinder on the right of the crown-wheel casing and acting on an exposed push-rod running forwards. Surtees was alone with a Honda V12, outwardly unchanged from its last appearance at Spa but with a new and improved engine, and Amon was alone with the 1967 Ferrari V12, number 003, as it was at the French G.P. Gurney and McLaren were entered by Anglo American Racers with the two cars used at Le Mans, plastic pipes to the metering unit being an obvious modification. Gurney had the latest car, number 104, but the titanium front suspension rocker-arms were replaced by standard steel ones, not through any failure, but as an experiment in the search for improved rigidity; McLaren had the earlier car, number 102. Cooper were out in force with a full team of three cars, Rindt with a brand-new car, with the 36-valve V12 engine tried out at Monaco at the beginning of the season, Rodriguez with the 1966 car he normally drives and Alan Rees being given a try-out in the modified 1966 chassis with the inboard rear brakes, the car that is normally kept as a spare.