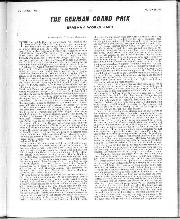 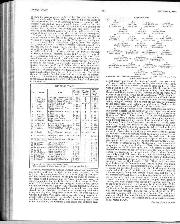 THE Automobile Club von Deutschland, who organise the German Grand Prix at the Nurburgring, were rather afraid that they would not get enough Formula One cars to make up a good starting grid and to keep the 22.8-kilometre circuit occupied for 15 laps sufficiently to satisfy the spectators, so they invited eleven Formula Two entries. These could not compete in the Grand Prix itself as the cars did not comply with the Formula One rules, and at first it was thought that they might start as a separate race after the Grand Prix field had started, but finally it was agreed to let them take their position on the starting grid with the bigger cars, according to practice times.

A full entry of Grand Prix cars was received, the only omission being the Rob Walker-Jack Durlacher Cooper-Maserati, as they could not agree to the starting money terms of the A.v.D., so Siffert was without a drive. McLaren had an entry but failed to arrive; so at the last minute the Brabham-B.R.M. V8 of David Bridges was accepted as a replacement, with John Taylor driving. Team Lotus were unchanged from Zandvoort, with Clark driving R14 with 2-litre V8 Climax engine and Arundell driving R11 with 2-litre V8 B.R.M. engine. After having had the rubber and steel vibration damper on the front of the crankshaft break up at Brands Hatch and Zandvoort, Coventry-Climax decided to run their engine without the damper. Jack Brabham should have had a new chassis, built on the same lines as the number 2 car driven by Hulme, but as it could not be got ready in time, Brabham retained the original car, so that he and Hulme were as they had been at Zandvoort. The 2.5-litre 4-cylinder Climax-engined car was in the transporter in case of emergency. Graham Hill and Stewart were still driving the old 2-litre B.R.M. V8 Tasman cars, as the H-16-cylinder cars were still giving gear-change problems and one thing that is needed at Nurburgring is a perfect gearbox that the driver can use without any conscious thought. The Cooper team had number 6 chassis for Surtees, number 3 for Rindt, and number 7 in reserve, the 12-cylinder Maserati engines being unchanged. Ferrari sent three cars and three drivers, Bandini and Parkes with the 12-cylinder 3-litre cars and Scarfiotti with the 2.4-litre V6 car. Dan Gurney had his lone Eagle, still with 2.7-litre 4-cylinder Coventry-Climax engine, and the rest of the entry was made up by the regular private teams and private owners, Bondurant in Bernard White's 2-litre B.R.M. V8, Spence in Parnell's Lotus 25-B.R.M. V8, now back to its original green colour, Bonnier and Ligier with their Cooper-Maseratis, Anderson with his Brabham-Climax, Chris Lawrence with the J. A Pearce Cooper-Ferrari V12, and John Taylor with Bridge's Brabham-B.R.M. V8.