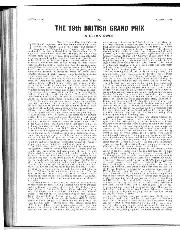 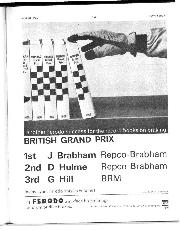 THE R.A.C. organised the British Grand Prix this year and took it to the Brands Hatch circuit, where it had previously been held in 1964, and a day of racing and stunts was concluded by the 80-lap Grand Prix for Formula One cars. A large and representative entry was arranged, the outstanding omission being the Ferrari team, their absence being attributed to various causes, depending on which "spokesman" you listened to. It could have been because of general workers' strikes in Italy, or because Ferrari felt that he was wasting his time sending Parkes or Bandini to the acrobatic little Kentish circuit, or again it could have been because the starting money offered by the R.A.C. was not sufficient, or because Ferrari is getting tired of motor racing generally. Whatever the reason, the result was a complete absence of works Ferraris, which tended to make the event a motor race rather than a Grand Prix motor race.

Everyone else was there, even if some were not in very good order, but there was no question about the orderliness of the Brabham team for Brabham and Hulme had the two cars that had run so well at Reims, the new car of Hulme having a tidier exhaust system, with the bunch of pipes from each bank of cylinders outside the top radius arm instead of around it. Brabham Racing also entered their 4-cylinder Coventry-Climax-engined car for Chris Irwin, the Formula Three driver. Tearn Lotus were in a sorry state, with only one car ready for practice and the second one being worked on back at Cheshunt. With the H16 B.R.M. engine and gearbox back at Bourne for modifications, the Lotus 43 was out of action, but realising a little while ago that this B.R.M. project was not going to do them much good before the end of the season, Chapman approached CoventryClimax about continued use of the 2-litre V8 Climax engine, and they agreed and were even more helpful by producing bits to make another 2-litre V8 engine. Lotus responded by building another Type 33 chassis and it was planned that Clark should have the new one, which was R14, and Arundel' should take over R11. At the last moment trouble developed in the second 2-litre Climax engine and it could not be got ready in time, so R14 was completed for Clark and R11 was without an engine; Arundell being without a car. B.R.M. then "found" a spare 2-litre B.R.M. V8 engine and gearbox and Lotus set to work to install the unit in R11, which meant a lot of modifying, in particular moving the gear-lever and linkages from the right to the left, to suit the B.R.M. gearbox. It was not surprising that Arundell was without a car on the first day of practice. Who would try and be a racing car constructor without the facilities of your own engine design and building department?