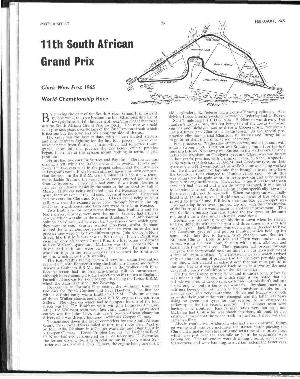 By moving the date of the South African Grand Prix forward by one week, the race became the first Championship Event for 1965 instead of the last event of 1964.This meant that there was no South African Grand Prix for 1964. The race was held as in previous years over 85 laps of the East London circuit which is just outside the town and lies along the side of the sea.

The entry was the best to date, with sixteen invited starters and nine entrants fighting for the last four places. These nine were selected from fourteen entries which had to better 1 min. 37 sec. at an informal practice the day before official practice began, but times at this session meant nothing in terms of grid positions.

Ferrari had two cars for Surtees and Bandini. The former was driving a V8, while the Italian drove a flat-twelve. It was nice to see the two cars back in the proper colour, and the entry was in Dragoni's name, Enzo Ferrari still not having his own competition licence. In the B.R.M. team Graham Hill had a new teammate, Jackie Stewart, the young Scot, being entered for his first Grande Epreuve. Three cars had come down from Bourne, a new car for Stewart basically the same as the car used by Hill at Mexico, Hill's car being unaltered since the Mexican race. As a spare, there was one of the old cars, in case of accident. Chapman had two cars for Clark and Spence. Clark's car is being called a 33B, now that the exhaust pipes come through between the top and bottom wishbones, and both cars were as used at Mexico.