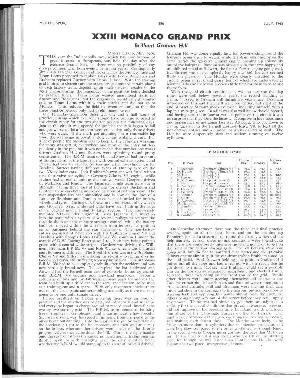 From the Motor sport archive

This year the Indianapolis race, which has now become of great interest to Europeans, was held the day after the Monaco Grand Prix, so there was no possibility of any drivers competing in both events, as in past years. Consequently Jim Clark and Dan Gurney did not enter for the Monaco race and Team Lotus proposed to replace Clark with Pedro Rodriguez and Brabham replaced Gurney with Denis HuIme. With the starting grid limited to sixteen cars the organisers guaranteed certain places to each factory team, depending on their drivers' results in the 1964 Championship, the remainder of the positions being decided by practice times. Team Lotus wanted guaranteed starts for Spence and Rodriguez, but the organisers would only guarantee one, so Team Lotus withdrew their entries and did not go to Monaco. This reduced the field to seventeen cars, so that the three practice periods only had to eliminate one car.

On Thursday afternoon there was one and a half hours of practice, during which everyone should have become adjusted to the circuit ready for the two shorter periods the following days. Just as the circuit was opened for practice the rain began to fall and got worse as the afternoon went on, so that only those drivers who were quick off the mark got anything like a reasonable lap time, the rest being impossibly slow in the soaking circuit. For a lot of people the problem was to keep all the cylinders working, for spray was getting everywhere and most of the entry sat despondently in the pits, but it was noticeable that number one works drivers Graham Hill and Surtees were splashing round pretty consistently. The B.R.M. team of Hill and Stewart had three cars at the circuit; all of the latest type with central exhaust system, and Ferrari had two V8 cars for Surtees and a flat 12-cylinder car for Bandini; Surtees having different types of Dunlop tyre on the two V8-cylinder cars. Jack Brabham's own car was fitted with a new four-valve-per-cylinder Coventry-Climax V8 engine, while HuIme had an earlier unit, as did the two works Coopers, driven by McLaren and Rindt. The Japanese Honda team were out in strength, having three cars at the pits for drivers Bucknum and Ginther, these cars being improved versions of last year's car.