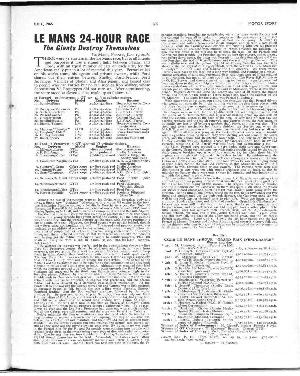 From the Motor Sport archive.

The giants destroy themselves

There were 51 starters in the Le Mans race, but to all intents and purposes it was a straight fight between Ferrari and Ford, with an equal number of cars on each side, for the Americans really put in a lot of material this year. Ferrari relied on his works team, his agents and private owners, while Ford shared out their entries between Shelby, Ford-France, Ford Advanced Vehicles of Slough and Alan Mann, and loaned cars to people who had entries but no car, such as Rob Walker, whose Serenissima VS Prototypes did not turn up. After scrutineering, the score stood at eleven a side, made up as follows:

Among the rest of the runners were an Iso-Grifo, with fibreglass body and i.r.s., a brand new "birdcage" Maserati with a 5-litre V8 engine in the back, two 8-cylinder Porsche coupés, a 6-cylinder Porsche in a 904, the Dino 166 Ferrari, the Rover-B.R.M. turbine car, a trio of works Alfa Romeo GTZ, Austin Healey Sprite, an M.G.-B, and numerous Triumph Spitfires and Renault-Alpines.