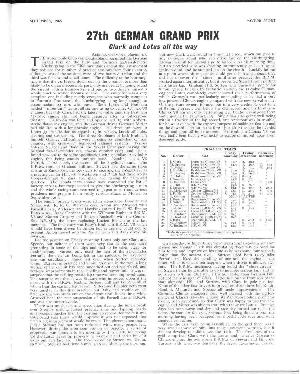 Clark and Lotus all the way

The Automobil Club von Deutschland organised the German Grand Prix on the hilly and tortuous 22.81-kilometre Nürburgring in the Eifel mountains and at the last moment they reduced the number of practice sessions from four to three, although two of the sessions were of two hours duration and the third was for one and a half hours. The difficulty at the Nürburgring is that if a car breaks down out on the circuit it is more than likely to be on an inaccessible part, only arrived at by going round the circuit with a transporter, and one or two drivers missed a whole practice session because of this. The entry list was a very complete one including nearly everyone who normally competes in Formula One races, the Nürburgring being long enough to accommodate 23 cars with ease. Both Lotus and Brabham fielded "three-car" teams, all six cars using Coventry-Climax V8 engines, but only Clark had the latest 32-valve unit, the Brabham 32-valve engine still not being repaired after its Silverstone disaster. Clark's car was R11, and Spence had R9, with a shortstroke flat-crank engine, and the German driver Gerhard Mitter had old R6, with a long-stroke engine. All three cars were to Lotus 33 specification as regards 13 in. wheels, knock-off hubs, steering and suspension.

The three Brabhams of Jack Brabham himself, Gurney and Hulme were all using 90 crankshaft Climax engines, with cross-over high-level exhaust systems. Ferrari entered Surtees and Banditti, the World Champion having the original flat-12-cylinder car, chassis number 0007, and also a brand new one to the same specification with a similar 12-cylinder engine, this being chassis number 0008. Bandini had a V8 Ferrari, chassis 0006, the second of the 8-cylinder cars. The B.R.M. team of Graham Hill and Stewart had the same three cars as at Zandvoort, the 1965 cars to race and the 1964/65 car as a practice car for Hill, while McLaren and Rindt had three works Cooper-Climax V8 cars, the spare one having the Hewland gearbox. The Honda team should have completed the list of factory entries, but they decided to give the Nürburgring a miss and the whole racing team returned to Japan to sort out various problems and prepare for a really serious attack at Monza on September 12th.