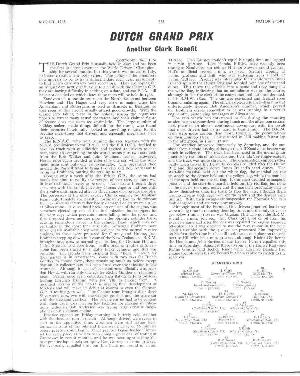 The Dutch Grand Prix is usually held in May and has been the first or second event in the World Drivers' Championship for several seasons, but this year it was moved to July, to become sixth in the 1965 series. The policy of the organisers now appears to he to try a different date each year, presumably to find which date attracts most spectators. They are hoping for an August date next year but due to a clash with the German G.P. they are having difficulty in settling on a date, and the F.I.A. still have not decided on which dates these races will be held in 1966.

Zandvoort is a seaside resort on the North Sea coast between Haarlem and The Hague and very close to major cities like Amsterdam and Rotterdam, as well as Brussels in Belgium, so that races at this circuit usually attract good crowds. With the Grand Prix taking place in the holiday season the organisers hoped to attract many casual spectators, and their claimed figure of 60,000 does not seem too optimistic. The large number of holiday-makers made things difficult for the teams, who found their favourite hotels fully booked or unwilling to eater for the peculiar meal-times that drivers, and especially mechanics, have to keep.

The K.N.A.C., who were running the race together with the N.A.V. (equivalent to the R.A.C. and the B.R.D.C.), decided to have no truck with qualification and invited 16 drivers to take part, these 10 comprising the six works teams plus two cars each from the Rob Walker and John Willment teams. However, Honda once again decided to enter only one car, while the Willment team sent only one car eventually. The organisers then invited the Parnell team to bring two cars and Bob Anderson to bring his Brabham, putting the total up to 57.