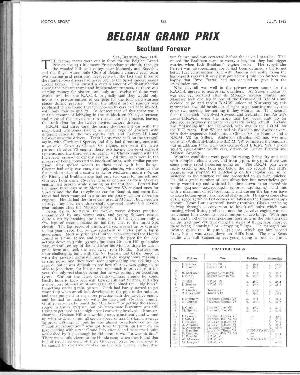 From the Motor sport archive

The factory teams were out in force for the Belgian Grand Prix on the 14.1-kilometre Francorchamps circuit, through the wooded hills and valleys near Malmedy and Stavelot, and the Royal Automobile club of Belgium assured each team two starting grid positions, irrespective of the fact that three of the number-two drivers had never been to the Spa-Francorchamps circuit before. This caused a certain amount of dissatisfaction among the private teams and independent runners, as there was starting money for sixteen cars only and twelve of these were works cars, but the R.A.C.B. originally said they would only invite six private entries to compete for the four paid starting places during practice. When the official list of runners was published it was found that ten non-works cars had been invited, with only four to qualify. In consequence of this there was a certain amount of lobbying in the paddock on Friday afternoon and none of the private entries turned out for practice, leaving the track clear for the twelve invited factory drivers.

B.R.M. had three cars, the spare development car with the non-plated wishbones having an earlier type of gearbox with different ratios to the two regular cars, and Graham Hill and Stewart were the drivers. Team Lotus were back on the strength again, with Clark and Spence, and they had three cars, one with a 32-valve Coventry-Climax V8 engine, one with the latest pattern 16-valve V8 engine, these two having low-level exhaust systems, and the third with an earlier V8 Climax engine with the high level, cross-over exhaust system. All three cars were in the process of being converted to knock-off hubs, with similar pattern 13-in. alloy spoked wheels to those used with bolt fixings. Cooper had only two cars, the 1965 chassis, with external side fuel tank in place of a scuttle tank, for McLaren, and a 1964 car for Rindt, and Brabham also had only two cars, for himself and Gurney, both using 16-valve Climax engines as their 32-valve engine had broken while running on the test bed. Ferrari had the same three cars as at Monaco, the two V8-engined ones for Surtees and the flat 12-cylinder car for Bandini, and extra fuel tanks had been mounted in a rather temporary fashion above the engines. Honda had the three cars used at Monaco, but, needless to 'say, they had new drive-shaft universal joints and revised gear linkage after the Monaco debacle.