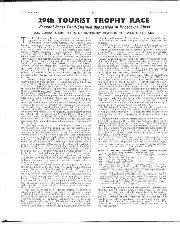 The T.T. has never been certain what sort of race it is supposed to be. This year, at Goodwood, sponsored by the Gallaher Senior Service Group, it was over 130 laps, for sports and prototype sports cars over 1,600 c.c. and GT cars over 2,000 c.c. This promised well, with Clark (Lotus 30 Ford), McLaren (Cooper-Oldsmobile), G. Hill's Ferrari 330P, Piper's Ferrari 275LM, Coundley's Lotus-19-Climax, 'Hobbs' Lotus 23B-Ford, the Repco-Brabham BT8 Climax cars of Dibley and Hulme, three Elva-B.M.W.s driven by Gardner, Lanfranchi and Trevor Taylor, and Natham's Repco-Brabham in the first group, five A.C. Cobra-Fords for Gurney, P. Hill, Sears, Olthoff and Salvadori, opposed by the four Ferrari 250 GTOs of Surtees, Ireland, Ginther and Maggs, three Jaguar E-types and Salmon's Aston Martin DB4GT in the GT section. Most of the drivers elected to go the 312 miles alone. There were only two non-starters, the Ferrari GTOs of Kerrison and Pierpoint, and the Nocker/Lindner Jaguar which Sutcliffe rolled into a ball in practice.

Race day enjoyed perfect weather but a small crowd. While the stands failed to fill up, a 21-lap race for GT cars up to 1,600-c.c., those deliberately and wisely barred from the T.T., took place. Stoop's Porsche 904GTS led for three laps but was caught into Woodcote by Spence's Chequered Flag Lotus Elan, which thereafter pulled out a solid lead, driven very hard and sounding ragged at the finish. He averaged 92.76 m.p.h. Stoop held his second place; from De'Udy's Don Moore Porsche 904GTS, with Morris in the Mefeo Porsche 904GTS sandwiched between, but a lap behind them, Crossfield's Elan being fourth. In the up-to 1,300-c.c. class Wagstaffs Team Elite Lotus won at 84.77 m.p.h. for 20 laps, from Ralph's Goss Racing Elite, Harris' Sebring Sprite a lap behind. On the second lap Weber's Elan, in third place, spun so viciously coming out of the chicane while straddling the kerb which marks the exit from the corner (not that anyone takes any notice of it) that a wheel came off and bounced twice amongst the spectators.