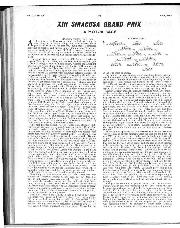 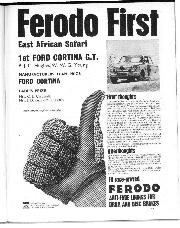 At first glance the Siracusa race did not look as though it was going to be very exciting, but as it turned out it proved to be one of the best yet. Rain made a complete nonsense of practice, and further rain on the morning of the race and a wet track before the start did little to arouse enthusiasm. However, in spite of this, a great crowd of Sicilians turned out and by the end of the race had had their money's worth of excitement.

Time and distance factors caused a difficulty over entries as regards Team Lotus drivers, and the Siracusa Club thought Jim Clark was going to lead the Lotus attack, whereas the Cheshunt concern sent Arundell and Spence with the two 25B cars used at Goodwood. The car Clark had driven had been re-modified back to 15-in. diameter Dunlop tyres and was fitted with a new type of 5-speed ZF gearbox with simplified selector linkage. It was Arundell's turn to drive this car, Spence taking the other one of the Goodwood pair. The Ferrari team used this race as a tryout for two new models, both developed from lessons learnt at the end of last season with the "stressed-skin" chassis cars that appeared at Monza, but much redesigning had taken place. Surtees had the latest model, with V8 engine, and a V6 model as a stand-by, while Bandini had a V6, all three being on the new 13-in. diameter Dunlop tyres mounted on new Ferrari cast-alloy 5-spoke wheels. The rest of the entry was made up of private teams and private owners, there being Hailwood and Amon with the Parnell team of Lotus 25 cars with B.R.M. V8 engines and Hewland gearboxes, the Centro-Sud team of 1963 ex-works B.R.M. V8 cars for Baghetti and Masten Gregory, and Bonnier was driving Rob Walker's 1963 Cooper-Climax V8 as their new Brabham was not ready. The private owners were Raby (Brabham-B.R.M. V8), Epstein (B.R.M. V8), Pilette (Scirocco-Climax V8), Jean Claude Rudaz, a young Swiss, with Rob Walker's 1962 Cooper-Climax V8, the Swiss Wicky with a Lotus 24-B.R.M. V8, and Revson and Siffert had similar cars, the last-named also waiting for a new Brabham, as was Anderson, who was forced to be a non-starter in consequence, the only other non-starter being de Beaufort (Porsche).