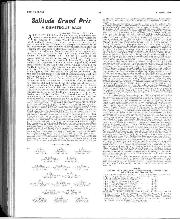 Although it had the makings of a rousing good Grand Prix race the event at Solitude was really only a make-weight for the German Motorcycle World Championship meeting, which included classes for 50 c.c., 125 c.c., 250 c.c., 350 c.c., 500 c.c. and Sidecars. With over 300,000 spectators attending the two days' racing to see the motorcycles, it was not surprising that the Formula One cars came on after the serious business was finished.

Practice on Friday and Saturday was held in blazing sunshine that was almost too hot to bear, and though there was a fair amount of hard driving, times did not get down to the 3 min. 49.1 sec. set up in last year's race by J. Clark, Esq. Team Lotus had their three cars with them, the Type 33 having altered rear suspension to match up with the previously altered front suspension, and the Brands Hatch winning Type 25B (or C, D, E or F), with 1963 steering and 1964 back suspension, as a spare for Clark, while Spence once again replaced Arundell in the Type 25 with 1964 steering and 1963 rear suspension. As this race did not count for any sort of Championship, Clark was concentrating on the Type 33, which was using a "flat-crank" Climax V8 engine, and on the second day of practice Gerhard Mitter was loaned the spare car.