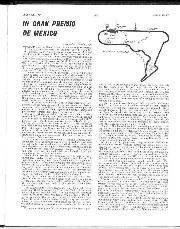 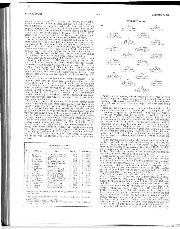 Twice since the World Drivers' Championship was started, the last race has been the deciding factor between two drivers: In 1958 at Casablanca it was between Moss and Hawthorn, while in 1962 at East London, South Africa, it was between Clark and G. Hill. Both these races were exciting due to the added anticipation of deciding the Championship. Also on both occasions it was between two British drivers in rival teams. This year's Mexican G.P., the last Grand Epreuve for 1964, has gone one better. The Championship was open to three British drivers in three rival teams, the 1962 pair Clark and G. Hill in Lotus and B.R.M., plus Surtees in a Ferrari.

The race here in Mexico City is over the artificial 5-kilometre circuit situated in a 600-acre sports park on the outskirts of the City. One of the major problems of the Mexican race is the altitude; the 7,400 feet above sea level gives a barometric pressure reading of 23.09 as against a normal reading of 29.90 at sea level. The effect of the rarefied air means a 20% weakening of mixture, which gives a drop in power of approximately 25 b.h.p. at peak revs (195 b.h.p. to 170 b.h.p. for Ferrari and Climax). Also affected by the lower pressure are the tyres; to get the same or similar handling characteristics it is necessary to lower the tyre pressures by 3 to 5 lb. Drivers and mechanics are affected by the altitude, too, but the human system acclimatises itself fairly rapidly to its new environment.

The cars arrived from Watkins Glen on three huge open transporters, each car wrapped like a Christmas present in polythene wrappers. After unpacking on the Wednesday before practice, mechanics set about changing engines and mixture cams, and putting right damage done during the American Grand Prix.