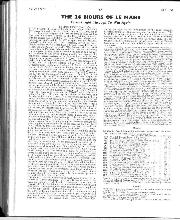 Ferrari Fight Through To Win Again

For a change it looked as though Ferrari might receive some severe opposition in the 24-hour race at Le Mans, for in the Prototype category there was the team of three 4.2-litre Lola-Ford V8 coupés, entered by the Ford Motor Company, with the drivers Phil Hill/McLaren, Ginther/Masten Gregory and Schlesser/Attwood, and in the GT category the 4.7-litre A.C. Cobra-Ford V8 from A.C. Car Company, driven by Sears/Bolton, and two Shelby-Cobra-Ford V8 coupes driven by Gurney/Bondurant and Amon/Neerpasch. The Cobras had shown their possibilities at Daytona, Sebring and Spa, and the Lola-Fords with the power of Detroit behind them were sure to be a menace, and Nurburgring had revealed their possibilities. Against this opposition Ferrari mustered a true fighting force, with Surtees/Bandini in a 4-litre rear-engined 330P, Guichet/Vaccarella, Parkes/Scarfiotti, Baghetti/Maglioli in 3.3-litre rear-engined 275P models, and he supplied another 4-litre 330P to Maranello Concessionaires (London) for Graham Hill/Bonnier and a similar one to Chinetti's North American Racing Team for Rodriguez/Hudson. As further support for Maranello in the Prototype category and for an overall win, there were two 275LM coupés, the E.N.B. car for Dumay/Langlois and the N.A.R.T. car for Piper/Rindt. In the GT category there were four 1964 GTO models, one run by E.N.B. for Bianchi/"Beurlys," the Maranello Concessionaires car for Ireland/Maggs, and two for the N.A.R.T. drivers Hugus/Rosinski and Tavano/Grossmann. Mixed in with all this crowd could well be the two factory Porsche 904 8-cylinder cars of Barth/Linge and Davis/Mitter, the competition Jaguars of Lindner/Nocker and Lumsden/Sargent, the 5-litre Maserati coupé of Trintignant/Simon and the DB4GT Aston Martin of Salmon/Sutcliffe.