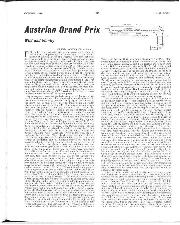 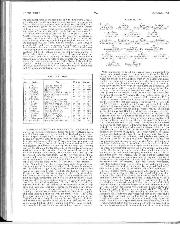 For the first time, Austria had an event ranking as a round in the World Championships and it was held on the military air field at Zeltweg, scene of a Formula One race last year, three Formula Two events before that, in 1959, '60 and '61, and two sports-car events in 1957 and 1958, so that in eight short years the local Club, supported by the National Automobile Club, have risen from nothing to a full-blooded Grand Prix. The enthusiasm and organisation have progressed accordingly, but the circuit, being a temporary one laid out on the runway and perimeter track of the airfield, has progressed hardly at all, in fact, the circuit as such has deteriorated into rough and bumpy concrete. Zeltweg is a small village almost in the middle of Austria and it was a long trek for the racing transporters coming from England, and even longer for those coming from the Mediterranean Grand Prix at Enna, in Sicily, the week before. Most of the drivers, and other people involved in a Grand Prix, flew to Austria, and used hire cars, but quite a few people drove there, including Surtees who came from Modena in his 330GT Ferrari, while the ever resourceful Brabham arrived in his private aeroplane.

As in previous years, the paddock was in a vast hangar, which was fine until someone started a racing engine, and the pits were in the middle of the runway, between the up leg of the course and the down leg, so that before practice could begin on Friday afternoon there was a minor Grand Prix for transporters and private cars, from the paddock to the pits, via the circuit. With a lap length of only 3.2 kilometres, and a lap time of around 1 min. 10 sec., the two hours' practice provided on the first-afternoon was more than ample for drivers to find their way round, and for cars to be adjusted to the conditions. Team Lotus had four cars with them, the latest Type 33, number R9, for Clark, the Solitude-winning Type 33 for Spence, still deputising for Arundell, Clark's old modified Type 25 as a spare and the other Type 25, previously driven by Arundell, now on loan to the Parnell Team, Clark's car was fitted with new drive-shafts made from 220S Mercedes-Benz shafts, and the spare car also had them on, as it had come direct from Enna, where Clark had driven it and tried the new shafts for the first time. The B.R.M. team were not too happy, still having only two cars, for Graham Hill crashed one while testing at Snetterton and his Solitude-crashed car had to be hurriedly rebuilt for the Austrian race, this being the latest of the 1964 cars. Ginther had his usual 1964 car, and both cars were using the old-pattern gearboxes as they were going to need low first gears for the hairpin. Some new rear wheels were being tried with half-inch wider rims, in an effort to flatten the Dunlops even more across the tread. Brabham was driving his brand new Brabham, this being its first outing, and though virtually the same as previous cars it was tidied up in details, notably, the mess of small tubes just behind the cockpit had gone, the pannier tanks were slimmer and no longer formed the cockpit sides, there being fibreglass panels covering the tanks, and the panelling around the engine was much neater. Coventry-Climax V8 engine and 5-speed Hewland gearbox were used as before, but new tubular drive-shafts were fitted, with Hardy Spicer joints outboard and flexible Layrub joints inboard, there being no sliding joint; Gurney had the same car as he has been using all season. The Ferrari team was as at Nürburgring, with two V8 cars for Surtees to choose from, and a V6 for Banditti, and all three cars were fitted with aluminium air scoops to the front brakes. McLaren and Phil Hill had the two 1964 works Coopers, with an old 1963 car as a standby, while the Walker team had a new addition to their ranks. R. R. C. Walker bought the Brabham chassis, lets engine and gearbox, that Brabham himself had been using all 'Season, and installed the V8 Climax engine and Colotti 6-speed gearbox from the team’s 1963 Cooper that Bonnier has driven on occasions. This new concoction was for Bonnier, as he could not get on too well with the high-revving B.R.M. V8 engine in the new Brabham chassis that Walker bought earlier in the season. The Brabham-B.R.M. V8, also with 6-speed Colotti gearbox, of the Walker team was on loan to the Formula Two driver Jochen Rindt, this being his local Grand Prix. The British Racing Partnership had got themselves under control once more, alter recent accidents, and both Ireland and Taylor were driving B.R.P. monocoque cars, with B.R.M. V8 engines and B.R.M. gearboxes, but the Parnell team were rather disorganised. In Sicily Hailwood had put his car into the lake on the inside of the circuit and it had gone back to England to be dried out, so Parnell borrowed the fourth Team Lotus Type 25 works car, with Climax engine and ZF gearbox, and hurriedly painted it the Parnell team’s dark blue/green. Amon was using this car and his own Type 25, with B.R.M. engine and Hewland gearbox, was driven by Hailwood. The Centro-Sud B.R.M. V8 cars were driven by Baghetti and Maggs, and Siffert, fresh from his win at Enna, and Anderson, with their private Brabhams, completed the field, the only non-arrival being Trintignant with his B.R.M. V8. Originally only 18 out of the list of 21 were to be allowed to start, but this was changed later and all 20 runners were permitted to start.