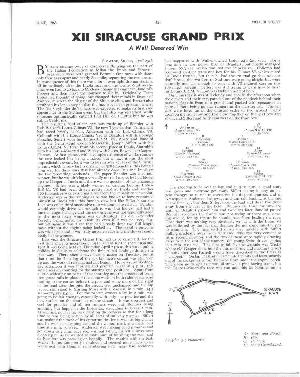 By some strange piece of disordered thinking on the part of the Italian Federation in Milan the Imola and Siracuse organizers were both granted Formula One races with dates only four days apart and nearly 800 miles separating the two towns. In consequence of this there was a lot of overnight driving starting off immediately after the Imola race, and the Centro-Sud mechanics even had to go back to Modena, change the engine in Bandini's Cooper and then make the journey to Sicily. Originally Team Lotus had thought of going, but changed their minds in favour of Aintree, much to the disgust of the Siracuse club, and Ferrari also scrubbed his lone entry so that the race was left to private-owners. The flat-8-cylinder de Tomaso was expected to make its first race appearance in the Sicilian event but that also was scratched, while someone optimistically entered Phil Hill on a Lotus but he was still in California.

At first glance, with a complete absence of works runners the race looked like being a fiasco, but in fact it was the most unpredictable event, for it was to be run over 56 laps of the Siracuse circuit, which is very fast, a distance of 308 kilometres, this being a long way for those cars that had already done Pau and Imola on the two preceding weekends. On paper Bonnier was a certain winner, but he was driving a virtually untried car, as he had blown up the Cooper at Imola and there was no question of just changing engines.