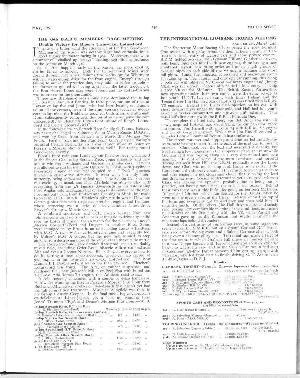 The Snetterton Motor Racing Club opened the 1963 Formula One season with a 50-lap event on their airfield circuit, and attracted a small entry of factory cars and some private owners. B.R.M. fielded two cars, with Graham Hill and Ginther as drivers, both being 1962 cars fitted with new engines, these having a new crankshaft layout, new firing order and tuned-length groups of exhaust pipes on each side of the V8 engine running into short tail pipes. Lucas fuel injection is retained and maximum speed is 11,200 r.p.m. Team Lotus had only one car running, this being a 1962 car with old-type V8 Coventry-Climax engine and Jimmy Clark was the driver. Cooper also fielded a lone entry, entering a 1962 V8 car for McLaren. The British Racing Partnership, now operating under their own name, were the same set-up as last year's U.D.T.-Laystall team, with Innes Ireland and the Texan driver Jim Hall on a pair of Lotus 24 cars fitted with B.R.M. V8 engines. Ireland had Lucas fuel-injection on his car, with short exhaust pipes under the back axle, and Hall had last year's layout of Weber carburetters and upswept stub exhausts. This was Hall's first outing with the B.R.P. in Formula One.

To complete the brief field there was Bob Anderson with his newly acquired Lola-Climax V8, it being the car Salvadori raced last season, Tim Parnell with a Lotus 24 with B.R.M. V8 engine and Colotti 6-speed gearbox, Wyllie in a Jim Russell entered 4-cylinder Lotus-Climax and Robinson in a similar car.

The circuit was wet and slippery and Ginther led initially, his team-mate having to start from the back of the grid due to missing practice. Clark took over the lead and increased it steadily, but was having a few moments on the slippery surface, and meanwhile Graham Hill was forging along in a very determined and sure manner. By dint of some of the most consistent and forceful driving yet seen from Hill, the B.R.M. gradually wore the Lotus down, and Clark was not looking at all happy as he skittered the Lotus round the slippery circuit. Hill refused to give up the chase and sure enough he got closer and closer, finally taking the lead and drawing away, looking so determined yet so relaxed, whereas Clark was looking the opposite, probably due to being out of practice, not having raced since the end of last season. Behind these two there was a nice little dice going on between McLaren, Ireland and Ginther, which was settled for the B.R.M. when he went up the escape road at the Esses. Ireland seemed on top of his form and eventually got by McLaren and then held him off until the finish. Of the others, Jim Hall drive a quiet and steady race looking very comfortable in spite of the conditions, and made no mistakes on his first outing with the V8, while Parnell and Anderson gave up, as did Robinson, but Wyllie completed the race some laps behind the leaders.