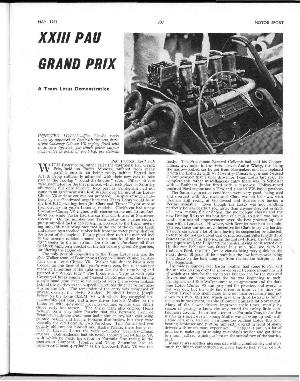 With Easter being rather early the traditional Pau Grand Prix, held on Easter Monday, suffered from many possible entries not being ready, neither Ferrari nor A.T.S. being sufficiently advanced with their new cars to take part in the 100-lap "round-the-houses" race. Fifteen drivers were assembled for the first practice, which took place on Saturday afternoon, but only fourteen took part as Trintignant had not come to an agreement with Rob Walker over the use of his Lotus-Climax V8 and the car was not prepared.

In spite of much publicity by the Goodwood organisers that Team Lotus would be at the B.A.R.C. meeting, both Jim Clark and Trevor Taylor were at Pau, driving last year's Lotus 25 models. Clark's car had a new Coventry-Climax V8 engine, with shorter stroke and Lucas fuel-injection, while Taylor had the car that Clark used at Snetterton recently. On the number one Team Lotus car a large electric pump supplied fuel at 110 lb./sq. in. pressure to the Lucas metering unit, this unit being mounted in the vee of the cylinder block and driven by a toothed rubber belt from the water pump shaft on the front of the engine. Plastic pipes then took the metered fuel to the injector nozzles situated in the mouths of air intakes at right angles to the air stream. On this car a Purolator oil filter had been hung on a bracket on the left of the 5-speed ZF gearbox, for filtering the engine oil.

The only possible opposition to the Team Lotus cars was the Rob Walker team, of Bonnier on a Cooper-Climax V8 and Trintignant on a Lotus-Climax V8. Walker was due to have a new Cooper on the lines of last year's works cars, but as it was not ready he hired one of the 1962 team cars for the time being and painted it "Walker blue." The Lotus was a Type 24 with 1962 Coventry-Climax engine and 6-speed Colotti gearbox, this having a right-hand gear lever in the cockpit with a cross-over linkage behind the gearbox as the 6-speed Colotti has the selector mechanism on the left.