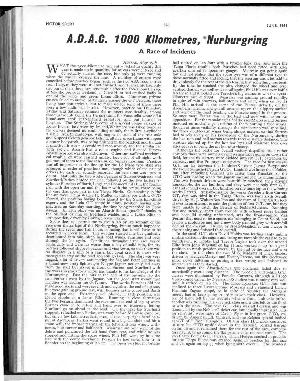 What the 1,000-kilometre race entry lacked in quality this year it made up in quantity, for 92 cars were entered and 67 actually started the race, but only 34 were running when the winner crossed the line. A number of entries were cancelled before practice began, such as the two ASA 1000 entries from Italy, as they were still not finished, and Team Elite had only two out of their three cars serviceable after the 500-kilometre race at Spa the previous weekend, as Clive Hunt had crashed badly in one of the white and green Lotus Elites. Numerous private entries failed to arrive, particularly among the GT Ferraris, there being four non-arrivals, but to make up for some of these there were a few additional entries.

However, practice on Thursday, Friday and Saturday reduced the numbers considerably, among those in trouble being the Ferrari team, for Vaccarella wrote off a brand-new 250P rear-engined prototype, and put himself in hospital. The Stirling Moss entry of a special coupé version of Lotus Elan to be driven by Ireland/Whitmore was taken home as the drivers deemed its roadholding unsafe, the 2-litre 4-cylinder 2 o.h.c. Abarth prototype, with engine in front of the rear axle and 6-speed Colotti gearbox behind, all in a space frame with open 2-seater bodywork, was being finished in the paddock and though it practised it was not considered race-worthy, and the similar car with 850 c.c. Abarth-Fiat 2 o.h.c. engine and 6-speed Simca-Abarth gearbox was also withdrawn.

Other cars suffered mechanical trouble, or were crashed mildly, but a lot of all-night work got most of them to the line at 9 a.m. on Sunday morning. Practice was all important as the line-up for the Le Mans type start was arranged in order of practice times, though which of the pair of drivers for each car actually recorded the best time was open to doubt. Naturally the two works Ferraris of Surtees/Mairesse and Scarfiotti/Parkes headed the line, followed by the two factory 8-cylinder Porsches of Barth/Linge and Bonnier/Phil Hill, the former pair with the open car and the latter with the coupé, these being the cars that took part in the Targa Florio. Outstanding in the line-up were Heini Walter/H. Muller in fifth place with a GTO Ferrari, the position having been gained by the Swiss hill-climb expert, and the Lola GT coupé in ninth position having only practised on Saturday morning, the time being recorded by Tony Maggs. In 11th place was an Abarth-Simca 1300GT thanks to the brilliant driving of Eberhard Mahle, and a Lotus Elite in 17th position, driven by Hobbs/Trevor Taylor.