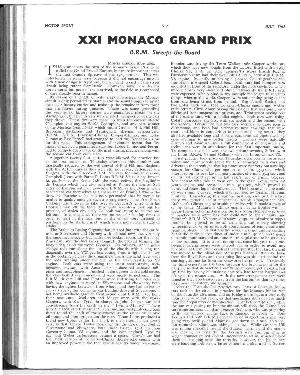 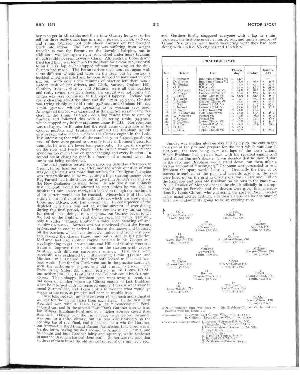 From the Motor Sport archive
This year it was the turn of the Monaco Grand Prix to be called the Grand Prix of Europe, but more important it was the first Grande Epreuve of the 1963 season. This was unfortunate in some ways because it did not encourage anyone with a new design to try it out, the accident hazard on the street circuit being rather formidable. However, some new designs were entered but none of them arrived, so the field was composed of cars already seen in racing.

By reason of a length of only 3.145 kilometres, the Monaco circuit is only permitted 16 starters and the usual thing is to invite the major factory entries and make up the remainder from those that are fastest during practice. There was some grumbling this year as no factory entries were guaranteed places on the starting grid, but five drivers were invited, irrespective of the cars they drove. These five were made up from the current World Champion and any ex-World Champion, and any past winner of the Monaco Grand Prix, which meant Graham Hill, Phil Hill, Brabham, McLaren and Trintignant, driving, respectively, B.R.M., A.T.S., Brabham-Climax, Cooper-Climax, and Lola-Climax as Reg Parnell had arranged to lend the Frenchman a car for this race. This arrangement of invitation meant that five makes of car had a guaranteed start but Lotus-Climax and Ferrari had to compete for a place on the grid, during practice, along with the second car from each team.

Altogether twenty-four entries were allowed for practice but at the first session on Thursday afternoon this number was drastically reduced by the withdrawal of Phil Hill and Baghetti with the A.T.S. cars as they were still not ready, Settember and Burgess with the Sirocco-B.R.M. V8 cars for similar reasons, Campbell-Jones with Parnell's Lotus-B.R.M. V8 as it had broken its gearbox at the Rome G.P. the week before, the 8-cylinder de Tomaso which had also suffered at Rome, the Centro-Sud entry of Bandini with an ex-works B.R.M. as the Bourne team needed the car themselves as a spare, and de Beaufort who withdrew his Porsche as he had been persuaded that he would be unable to qualify amongst such a strong entry. The Frenchman Collomb was allowed to take over de Beaufort's entry with his Lotus-Climax V8, so there were only seventeen cars out for practice, of which obviously Collomb was going to be the one left out. In consequence there was no need for fast lap times in order to start in the race, but all the efforts were directed to positions on the starting grid, which was a more normal sate of affairs.