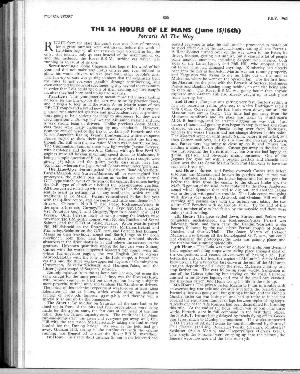 Right from the start this year's race was short of runners, for a great number were withdrawn before the week of Le Mans began; all the reserves were brought in but the entry still totalled only 49 cars instead of the maximum of 55, and this included the Rover-B.R.M. turbine car which was running in an event of its own.

Scrutineering: Colin Chapman had kept to his word of last year and did not make any Lotus entries and even refused to allow his works drivers to take part with other people's cars. The line-up of cars was getting so short that the organisers bent the rules to get everyone possible through scrutineering, and even extended the hours of scrutineering way beyond the maximum in order that Lola could get one of their exciting 4.7-litre coupés in, after they had been held up by bad weather.

Practice: This year practice meant more than mere testing periods, for the line-up for the start was to be by practice times, and it began to look as if the works Aston Martin team of two DB4GT coupés and a brand new Prototype 215 with 4-litre engine, 5-speed rear-mounted gearbox and independent rear suspension, were going to be a serious challenge to all-comers, for they were reaching around 180 m.p.h. down the Mulsanne straight and had a very strong team of drivers. Unlike previous Aston Martin cars these were really motoring by any standards. However, near the end of practice the trio of works 250P Ferraris and the North American Racing Team's front-engined 4-litre ex-sports Ferrari began to show their paces and dominated the line-up, though Phil Hill with the new Aston Martin was in fourth position. The Cunningham team of three new lightweight Jaguar E-types, with hard-tops, and the two A.C. Cobras, with 4.7-litre Ford V8 engines were all lacking maximum speed down to Mulsanne, it being a simple question of b.h.p. The 4-litre Ferrari coupés were giving 385 b.h.p. and the 3-litre works cars must have had 350 b.h.p., whereas the Jaguars and Cobras were under 300 b.h.p.