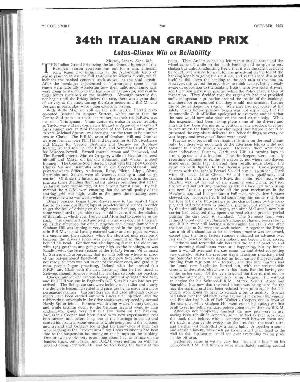 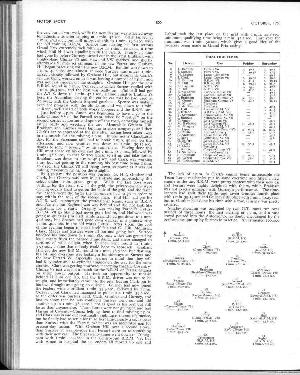 From the Motor Sport archive
The Italian Grand Prix being the last Grande Epreuve of the European season everyone was out for a win, although some teams had misgivings as the Automobile Club of Milan planned to use the full 10-kilometre Monza circuit, which includes the banked concrete track as well as the road circuit. Alter the breakages experienced at Nurburgring some of the teams were naturally wondering how their light and fragile cars were going to stand up to the high-speed hammering and centrifugal forces sustained on the bankings. Although practice did not begin until the Friday before the race, there was a great deal of activity at the track during the days before and B.R.M. and Ferrari, in particular, were doing extensive testing.

With Willy Mairesse still on the sick list the Ferrari team co-opted Bandini to support Surtees, which meant that the Centro-Sud team lost their star runner, so their red B.R.M. was loaned to Trintignant. Team Lotus were also in driver trouble, as Taylor was still not completely fit, and as Arundell was entered for a Junior race at Albi the second of the Team Lotus Junior drivers, Michael Spence, was brought into the team to be number two to Clark.

The B.R.M. team of Graham Hill and Ginther were on form, as were Phil Hill and Baghetti for A.T.S., McLaren and Maggs for Cooper, Brabham and Gurney for Brabham Racing, Ireland and Hall for B.R.P., and Settember and Burgess for Scirocco-Powell. Parnell entered Amon and Hailwood, and Tim Parnell entered Masten Gregory, while de Beaufort entered himself and Mitter on his old Porsches, and Walker entered Bonnier. The Centro-Sud entered Cabral with their new Cooper-Climax V8 and Brambilla with an old Cooper-Maserati, and private-owners Siffert, Anderson, Raby, Pilette, Lippi, Abate, Starrabba and Seifert were all entered, making a total of 33 entries.

Of these the fastest 30 were due to take part in the race, practice times deciding the final list, always providing that all the 30 fastest were within 10% of the second fastest time. By this method the A.C.M. were ensuring that the overall quality of the starting grid was high, while at the same time making room for everyone who was worth while.