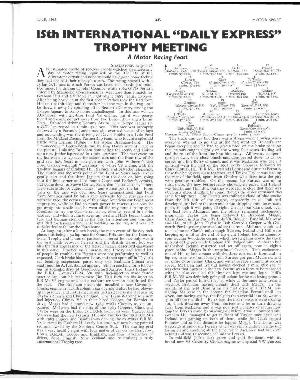 An estimated crowd of 100,000 people watched an interesting day of motor racing organised by the B.R.D.C. at the Silverstone circuit and nobody could have gone home feeling they had not had their money's worth. The racing opened with a 25 lap G.T. race in which Parkes was favourite according to practice times, his driving of John Coombs' white 1962 GTO Ferrari, entered by Maranello Concessionaires, was more than a match for Graham Hill and Salvadori in lightweight 1963 Jaguar E-types. After being boxed-in at the first corner Parkes took the lead from Hill on the third lap and thereafter had the race in the bag until he threw it away by spinning off at Beckett's Corner, leaving the E-type Jaguars to romp home unchallenged. In this race was an AC-Cobra, with 4.7-litre Ford V8 engine, but it was poorly tuned and could not get away from two Lotus Elites and a Lotus Elan. Salvadori driving Tommy Atkins' new E-type Jaguar set a G.T. lap record in 1 min. 42.4 sec.

This race was promptly followed by a Formula Junior race also over a distance of 25 laps and outstanding was the driving of David Hobbs in a Lola-Ford from the Midland Racing Partnership team, who fought a splendid battle with Dennis Hulme in the works Brabham-Ford. The "monocoque" Lotus-Fords run by Ron Harris were still not in the picture, Lola and Brabham dominating the scene, and Hobbs set a new Junior lap record in 1 min. 40.2 sec. The next event on the list was a 12 lap race for saloon cars and the front row of the grid saw Jack Sears in pole-position with John Willment's vast Ford Galaxie with full "Daytona" 6.9-litre V8 engine, with the 3.8-litre Jaguars of Graham Hill, Salmon and Salvadori alongside. The clutch was the weak point of the Ford so Sears made a very gently start and the three Jaguars shut the door on him going into the first corner and led round Copse and Beckett's corners, but going down to Stowe Corner, Sears demonstrated that, "there is no substitute for cubic inches" and wafted past the lot. From then on the race was over and Sears demonstrated that Ford from America must be taken very seriously for he just ran away with the race, the cornering of this huge American car being most impressive, while he had so much power in reserve that once he got away into a safe lead he went all the way round in top gear. Needless to say the Galaxie set a new class lap record in 1 min. 51.6 sec. and while trying to keep up, Graham Hill's Jaguar burst a tyre and Salmon stopped at the pits for attention and was disqualified for having a mechanic working on the car, so it was left to Salvadori to follow the Ford home.