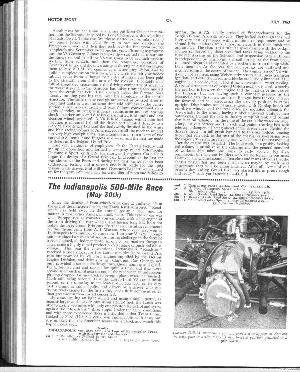 Since the demise of front-wheel-drive cars at Indianapolis at the end of the nineteen-forties, the Frank Kurtis-inspired "Roadster" has held sway in the annual 500-mile race, and for matter in most other American track races. This type of car was what Europe used to consider conventional, with a big engine at the front driving the rear wheels, and having long low lines not unlike the 1939 Grand Prix cars. Further successful developments on this theme came from A. J. Watson, whose cars have won at Indianapolis for a number of years now.

Last year Mickey Thompson introduced a successful and promising challenge in the form of a rear-engined, all independently sprung car on modern European lines, using a highly tuned production V8 engine of push-rod o.h.v. design. This year the conventional Indianapolis "Roadster" received a rude shock, for two Lotus cars similar to Grand Prix cars but powered by V8 Ford engines, supplied by the Detroit Engine Division, and driven by Jim Clark and Dan Gurney, not only provided a serious challenge throughout training and qualifying, but lay first and second for quite a time, and then were second and fourth until near the end of the race when an unforeseen pit-stop dropped Gurney back to seventh place, where he finished, Clark still being second. That the Lotus-Ford V8 could finish second, on the same lap as the leader after 200 laps, on its very first attempt at Indianapolis, and driven by a driver who was trying track-racing for the first time, needs little comment other than great admiration for all concerned.