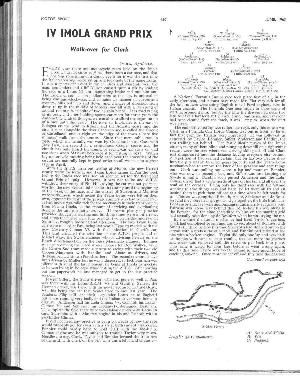 Every year there are motorcycle races held on the Imola circuit, but not since 1956 has there been a car race, and that one was something of a classic event for it was the first time the Italian sporting world sat up and took note of the name Lotus. It was a sports-car event in which Osca and Maserati were the main contenders and Cliff Allison caused quite a stir by leading the race in a Lotus XI until something broke and put him out.

The Imola circuit is 5.017 kilometres to the lap, is unusual in being run anti-clockwise, and contains all manner of curves and corners, hills both up and down, and changes of direction from down to up in the middle of corners, and all with a lap speed of around 100 m.p.h. in spite of two hairpin bends. It is road racing at its best, and after holding sports-car races for three years the Automobile Club of Bologna were unable to afford the organisation of a race until this year. The town of Imola lies to the east of Bologna on the road to Rimini and the Adriatic coast, and the circuit runs alongside the river Santerno and is called the Circuit of Castellaccis and is right on the edge of the town a bare five minutes' walk from the centre. Since that memorable race in 1956, which incidentally was won by Castellotti in an Osca with Jack Brabham second in a central-seat Cooper sports car, the circuit has only heard the sound of racing-car exhausts on odd occasions when Maserati borrowed it for testing in 1957. With a big motorcycle meeting being held each year the amenities of the circuit are naturally kept in good order so all was set for a great race in April.

With the A.T.S. firm out testing at Monza, the new Ferrari nearly ready for testing, and Team Lotus racing at Pau the week before the Imola race was due, all seemed set for the first good Grand Prix of 1963. However, it was not to be and A.T.S. withdrew their entry of Phil Hill, saying the car was not yet race-worthy, the new Ferrari did not start its testing until the beginning of the week of the race, and the entries of Surtees and Mairesse were withdrawn, which meant the Team Lotus were left on their own, opposed by most of the private runners who had been at Pau. It had been a 750-mile trek for the mechanics in their transporters, from Pau to Imola, so the amount of servicing and overhauling done to the cars was not excessive.