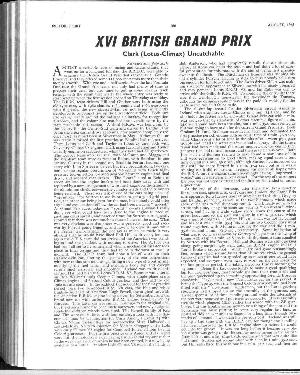 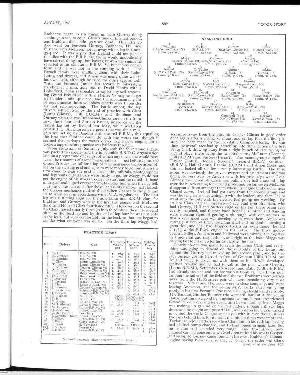 From the Motor Sport archive
Amidst a veritable feast of racing and circus stunts, that went on for a long and full day, the B.R.D.C. were able to organise the British Grand Prix that ranked as a Grande Epreuve, and they offered some 115,000 spectators more than their money's worth. With two and a half weeks since the last Formula One race the Grand Prix teams not only had plenty of time to prepare their cars, but also time to put in some serious track testing, with the result that nearly the whole entry was ready to start practice when the first session opened on Thursday at midday.

The B.R.M. team-drivers Hill and Ginther were both using the old-type cars, with 1962 chassis, 1963 engine and 1963 gearboxes with 6 speeds, the new stressed-skin car not being sufficiently developed to be competitive on the Silverstone airfield. Both cars had orange bands around the radiator air intakes, for recognition purposes, and the colour also matched the overalls worn by the team mechanics this season. A third B.R.M. was being run by the factory for the Centro-Sud team and driven by Bandini, this being the 1962 car he drove at Reims, now painted completely red once more, as it had been at Silverstone in May. Although the car was ready it missed the first practice as Bandini had not arrived.

Team Lotus had Clark and Taylor in Lotus 25 cars, both with Coventry-Climax V8 engines, Clark using fuel-injection and Taylor an early engine on carburetters, while they both had ZF gearboxes. The Cooper team were as usual, with McLaren and Maggs, and the Brabham team were as raced at Reims, with Brabham in one car and Gurney in the second car, Scuderia Ferrari had only one entry with John Surtees as driver, but they brought along two cars, both to the regular prescription of V6 engine with Bosch high-pressure fuel-injection, 6-speed gearbox between engine and final drive, and inboard rear brakes. The "ears" used at Reims to scoop air into the engine intakes had been done away with and replaced by a new arrangement of wire-mesh cage over the trumpets, the aluminium shield between the cylinder heads and the trumpets being retained.