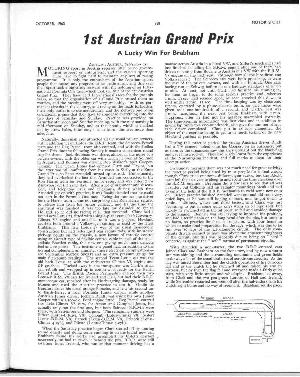 Motoring sport in Austria receives little or no government support or enthusiasm, and the various sporting clubs have to fight hard to maintain any sort of racing programme. It is only the enthusiasm of the Austrian sports people that causes any progress to be made at all, and this year their sport took a big stride forward with the holding of an International Formula One race, which took the title of the 1st Austrian Grand Prix.

They have held International races for the past six years, so that the organisation of a Grand Prix caused them no worries, and the meeting went off very smoothly. With no permanent circuits in the country, and racing on the roads forbidden, their only outlet is to use aerodromes, and the Zeltweg one being operational means that they have to condense everything into the two days of Saturday and Sunday. Practice was provided on Saturday afternoon and Sunday morning, with the race starting in mid-afternoon on Sunday, and as the circuit, which is marked out by straw bales, is an easy one to learn, this was more than adequate.

Naturally, this small race attracted all the usual private owners, but in addition Team Lotus, the B.R.P. team, the Scirocco-Powell team and the Reg Parnell team also entered, and with the Italian Grand Prix due the following Sunday it made a convenient round trip for them. Jack Brabham was there, almost in the guise of a private-owner, with the older car with which he won at Solitude in August, and Bonnier was driving Rob Walker's 1962 Cooper-Climax.