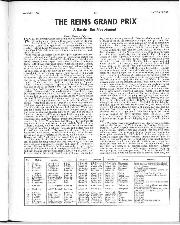 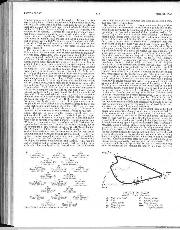 A Battle - But Not Heated

With work at the Ferrari factory held up by a general industrial strike in Italy and the Porsche team at Nürburgring sorting out their cars for the French Grand Prix, the Reims race was almost a British national benefit, apart from a few Continental independents. B.R.M. had their usual cars for Graham Hill and Ginther, the latter with the 6-speed Colotti gearbox, and both cars had new extractor-type low-level exhaust systems. These were similar to the ones used at Spa but now the four pipes on each side discharged into an open-ended venturi pipe instead of a parallel pipe. The Cooper team had only one V8-engined car, the newest of their two 1962 cars, and this was for McLaren, while Maggs had the C.T. Atkins 1961 ex-works car with 4-cylinder Climax engine. Team Lotus had Clark on the Spa-winning "monocoque," the B.R.M.-engined Type 24 with 6-speed Colotti gearbox, and at the last moment a new Type 24 with the V8 Climax engine from Taylor's crashed car at Spa, and a 5-speed Colotti gearbox. Peter Arundell was to take the third Team Lotus entry, but things were in a state of flux until the morning of the race. Brabham had his own Lotus 24, Trintignant had Walker's similar car, and U.D.T.-Laystall had their usual two cars, Gregory on the B.R.M. V8-engined one and Ireland with the Climax V8 engine. After their chassis breakage at Spa both these cars had reinforced mounting points for the bottom wishbones at the rear. The Bowmaker-sponsored Lola team had their two V8-engined cars for Surtees and Salvadori, and every time you look at them they seem to have had another tube or two added to the chassis frame, increasing its stiffness by a considerable amount; in consequence the handling improves all the time, while suspension modifications seem to have stabilised with similar marked improvements. The S.S.S. Venezia team had Bonnier driving their old 4-cylinder Porsche and Abate on the ex-Rob Walker Lotus-Climax 4-cylinder, while the only other non-British entries were de Beaufort with his 4-cylinder Porsche, and Siffert with his Lotus-Climax 4-cylinder. To complete the entry there was Lewis with his Cooper, his B.R.M. still being back at Bourne, having proved most unsatisfactory, Shelly with a Lotus 18 and Burgess with the Anglo-American team's Cooper Special.