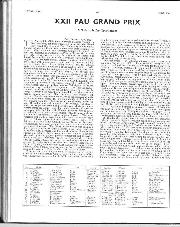 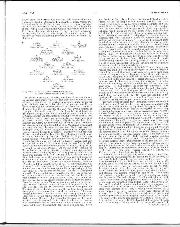 A Triumph for Trintignant

The Automobile Club Basco-Bearnais gathered togetner a first-class entry for their traditional Easter Monday Grand Prix round the streets of Pau. Eschewing the BARC Goodwood meeting Team Lotus entered both their Formula One drivers: Clark with the new Coventry-Climax V8-engined car that was successful at Snetterton, and Trevor Taylor with a brand new 1962 works car, made ready for a BRM V8 engine, but forced by non-delivery to use a 4-cylinder Coventry-Climax engine. The Scuderia Ferrari entered Rodriguez and Bandini, the former with a 120-degree engine and the latter with a 65-degree engine, both chassis being identical and the interim 1962 type, which is still with the 6-speed gearbox behind the axle. Brabham was making his first appearance with a Lotus, albeit with only a 4-cylinder Coventry-Climax engine, and another first appearance was Lewis with his V8 BRM, similar in mechanical respect to that of Marsh, who was also entered. Rob Walker, like Colin Chapman, also decided Pau was a better thing than Goodwood, so he lent his V8 Lotus-Climax to UDT-Laystall, who responded by lending Team Walker one of their old 4-cylinder Lotus-Climax cars and Walker took on Trintignant as driver, altogether a very amicable arrangement. The Porsche factory entered one of their old cars for Ludwig Heimrath to drive, he being a German-born Canadian who qualified for this drive in a race in Canada last year. With the flat-8 works Porsches still not ready Bonnier was once more on loan to the Scuderia Venezia, leading team-mate Vaccarella. To complete the field of 18 there was Bianchi With the ENB-Maserati, considerably tidied up since Bruxelles, and with a shorter nose cowling; Ian Burgess with the Anglo-American Equipe's new car, which has a new chassis frame on Cooper lines, but much narrower; Cooper-like suspension all-round but with different geometry, and radiators on each side of the rear-mounted engine so that the nose of the car had the smallest aperture to let air into an oil cooler. The water radiators took air from scoops on each side of the narrow body, and the Climax engine had twin exhaust pipes. Siffert took delivery of his new Lotus-Climax, the one Taylor had borrowed for Bruxelles, but it now had another engine and a V8-type bodywork painted orange. The Swiss driver Caillet was making a first appearance with his Cegga-Maserati, a very nicely made car on conventional Formula One lines, with all-round independent suspension, tubular chassis frame and rear-mounted 4-cylinder Maserati engine and 5-speed gearbox/differential unit as used on the V12 Maserati "birdcage" sports car. Cegga is derived from Claude et Georges Gachnang, Aigle, the two brothers who built the car and the Swiss town where they live. Finally, there was the German F3 and Junior exponent Kurt Kuhnke with an early rear-engined Lotus, Schiller with his ex-works Porsche and Schlesser, making his return to Formula One with his old Cooper.