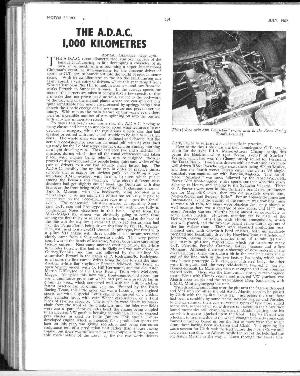 Taken from the Motor Sport Archive

THE A.D.A.C. 1,000-kilometre race, run over 44 laps of the famous Nurburgring, is fast developing a character of its own, in as much as it is becoming a super International Clubman's event, or stepping-stone for the amateur driver of sports or G.T. cars to branch out into the world of serious motor racing. With its 22 kilometres to the lap the Nurburgring can easily absorb a vast entry of drivers, which this year ranged from World Champion Phil Hill to rank newcomers, and cars from the works Ferraris to Sunbeam Alpines. In the average sports car most of the corners are taken at comparatively low speeds, so that a mistake does not prove too disastrous, except to the bodywork of the car, and of the myriad places where one can spin off it is quite remarkable how many are protected by springy hedges that absorb the kinetic energy of the gyrating car and prevent serious injury. With rain as the main feature of this year's event there were an incredible number of cars spinning off into the bushes, with very few injuries to record.

On paper this year's race was a riot, the A.D.A.C. having so many classes and being so undecided about what features of a car decided its category, while the regulations allowed cars that had crashed or retired with mechanical trouble to be able to win their class. The whole affair was most confused and chaotic, but the actual 1,000-kilometre race was its usual self, with 67 cars lined up ready for the Le Mans-type start at 9 a.m. on Sunday morning in a light drizzling rain.